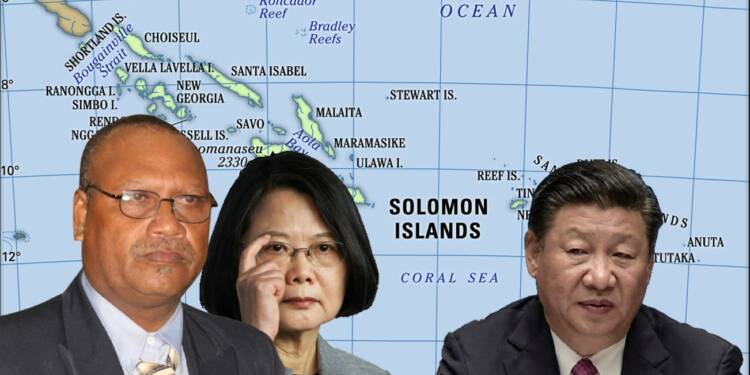 Taiwan has caught the Chinese Communist Party napping in the Second World War-era battleground of the Solomon Islands. In 2019, the CCP had managed to induce the Solomon Islands into dumping its close ally Taiwan and establishing formal diplomatic ties with Beijing instead. However, a people’s movement and ethnic violence in the Pacific Island country is now compelling the Solomon government into switching diplomatic ties all over again and recognising Taiwan.

In fact, The Telegraph has reported that as per Daniel Suidani, the leader of Malaita, the second largest province in the Solomon Islands, the country could switch formal recognition from China to Taiwan, if Prime Minister Manasseh Sogavare is ejected by a no-confidence motion. Suidani has also warned that his province would look for independence if the Prime Minister doesn’t stand down.

Ethnic violence in the Solomon Islands:

The Solomon Islands is presently at the brink of a civil war and there is increasing friction between the federal government of the island nation and the provincial government of Malaita, the second-largest and most populous province in the archipelago.

On November 24, around one thousand people held a peaceful, anti-government rally in the capital Honiara. However, it doesn’t take much time for angry demonstrations to turn violent, and in the Solomon Islands too, violence, looting and arson followed what started as a peaceful rally. With three people dying in the ensuing violence, the Solomon Islands had to seek help from the region’s biggest power- Australia, which was happy to oblige.

The Solomon Islands has a history of ethnic violence:

The ongoing violence in the Solomon Islands has opened up old wounds. The country is historically famous as a battleground of the Second World War, and the crucial Battle of Guadalcanal too is named after the country’s largest island where the capital Honiara is located.

Later, in the 1990s, the archipelago nation was gripped by ethnic tensions, when the inhabitants of the Malaita province had migrated in large numbers in search of economic opportunities to Guadalcanal and Honiara. In the late 1990s, a brutal and aggressive campaign was launched by native Guadalcanal islanders, known as Guales, to drive the Malaitans off the island.

The aggressive campaign against the Malaitans had then led to sheer anarchy in the Solomon Islands. An armed group called the Malaita Eagle Force militia was set up to protect the Malaitans. The militia managed to capture the then Prime Minister Bartholomew Ulufa’alu, a Malaitan himself, because the armed group thought that he was not doing enough for their cause. Ulufa’alu had then resigned in exchange for his life and liberty, and the current Prime Minister Manasseh Sogavare took over.

As such, the ethnic violence of the 1990s and 2000s broadly divided the Solomon Islands on ethnic lines between the Malaitans and Guales.

How China came into the picture:

When the Solomon Islands slipped into widespread ethnic violence and conflict around two to three decades ago, China was nowhere in the picture. The conflict between Malaitans and Guales was an internal matter for the Solomon Islands and the country had requested only Australia and New Zealand for help. So, how did China become a cause of ethnic violence in the archipelago nation? Well, let’s go back in time to 2019.

In 2019, Solomon Islands Prime Minister Manasseh Sogavare decided to abandon his country’s close ally- Taiwan and establish formal relations with China instead. Jonathan Pryke, Director of the Lowy Institute’s Pacific Island Program, believes that Sogavare’s decision was based on financial calculations. Pryke said, “The calculus, at the end of the day, would have been that the Solomon Islands can get more out of this relationship with China than Taiwan. And that was how it was sold to the Solomon Islands people.”

However, the federal government’s decision to recognise China and abandon Taiwan didn’t go down well with Malaita. The most populous province in the archipelago nation banned Chinese companies and also said yes to American aid. Malaita Premier Daniel Suidani kept supporting Taiwan and even flew to the island nation for medical treatment in June.

The geopolitics around China and Taiwan is now becoming a contentious issue between the provincial government in Malaita and the federal government. Malaitans are directing much of their anger against China. In fact, some buildings were also burnt in parts of the Chinatown district during the recent spell of ethnic violence in the Solomon Islands.

In 2019, China thought that it had successfully purchased the loyalty of the Solomon Islands. However, it seems that Taiwan, its allies like Australia and the US, and the province of Malaita are on the verge of staging a major turnaround by forcing the federal government of the Solomon Islands into recognising Taiwan all over again at the expense of the CCP.