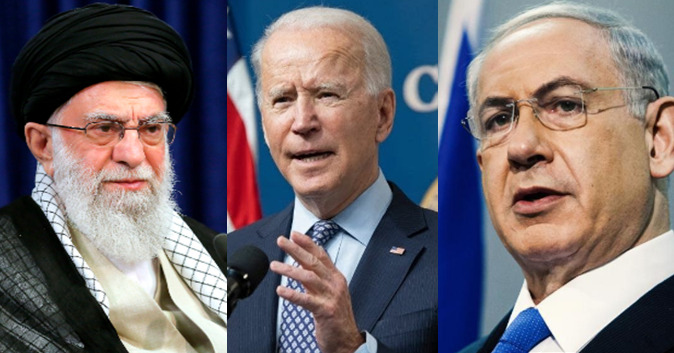 In just six weeks of Biden’s Presidency, US-Iran ties are changing again. Up until now, Iran was aggressive and Biden seemed desperate to revive the Joint Comprehensive Plan of Action (JCPOA), or the Iran nuclear deal. But suddenly we see the tables turning on Tehran. The Shi’ite nation is on the backfoot and Biden is looking strong with an extension of Trump’s sanctions in the pipeline and American B-52 bombers in the Persian gulf. So, what changed? Did Biden suddenly have a change of heart, or are there any geopolitical forces at play?

Well, there is no change of heart. The only reason is Israel. Biden is surrendering and resetting his Iran policy in the face of Israeli Prime Minister Benjamin Netanyahu’s unprecedented stance against Iran and stern opposition to the revival of Iran nuclear deal. Biden is unable to resist the pressure being mounted by a miffed Israel, which is going as far as making subtle threats of waging war on Iran in case the US joins the JCPOA all over again.

So, how is Biden changing? For starters, the US President dispatched a pair of B-52 bombers to the Middle East region. We know that this was a display of American military firepower against Iran, because the US bombers were accompanied by military aircraft from Iran’s main enemies- Saudi Arabia and Israel, apart from Qatar.

The B-52 bombers were put on display a couple of weeks after the Biden administration ordered an airstrike against “Iran-backed militia” in Syria.

Biden’s latest blitz has compelled Iran to promise cooperation and to cooperate with the White House, if the latter lifts sanctions. Iranian President Hassan Rouhani said, “Iran is ready to immediately take compensatory measures based on the nuclear deal and fulfill its commitments just after the U.S. illegal sanctions are lifted and it abandons its policy of threats and pressure.”

There is a clear realisation in Tehran about how Biden was earlier desperate to reinvigorate the Iran nuclear deal, but now he is facing tremendous pressure from American allies, especially Israel. So, he is changing course and this is making Iran get rid of its aggressive posture and start negotiating properly.

Needless to mention, Iran’s nervous leadership must have noticed how Biden has extended the National Emergency declared with respect to Iran in the year 1995. He has also continued the ongoing sanctions against Iran.

In a letter addressed to House Speaker Nancy Pelosi, Biden declared,  “I have determined that it is necessary to continue the national emergency declared in Executive Order 12957 with respect to Iran and to maintain in force comprehensive sanctions against Iran to respond to this threat.”

On a cursory look, it might seem as if Biden realises the seriousness of the situation. But in reality, it is Netanyahu’s aggression which is compelling Biden to stay tough on Iran.

Israel’s PM is simply threatening to go to war with Iran if the Iran nuclear deal is revived. Benny Gantz, Israel’s Defence Minister, has disclosed that the Israeli military is updating its operational plans to strike nuclear sites in the Shi’ite nation.

Netanyahu himself spoke to Biden’s lieutenant, Vice President Kamala Harris and told her that he won’t let Iran get the nuclear bomb. Netanyahu’s office issued a statement reading, “The prime minister said we would continue to strengthen our intelligence and security cooperation and said during their conversation that as prime minister of Israel, he is totally committed to preventing Iran from developing nuclear weapons that are meant for our destruction.”

Within Israel, Netanyahu has turned the Iran threat and Biden’s attempt to rejoin the Iran nuclear deal into an election issue. Netanyahu is not backing down. In fact, he has overwhelmed the Democrats who want him to lose the upcoming elections in Israel. Netanyahu’s approval ratings in Israel are on a high and the Biden administration simply cannot take him for granted. Biden can neither afford to lose the goodwill of the Jewish lobby in the United States, nor can he trigger a regime change in Israel.

Using all his might, in just over a month, the Israeli PM has forced Biden to take Trump’s way on Iran. There is intense pressure on Biden, because Israel’s PM is repeatedly demonstrating Israel’s strength and the lengths it would go to defend itself and protect its interests. This sense of pressure from the Jewish nation has forced Biden to take an about turn and go tough on Iran.