From Bibi to Modi: Biden is trying to destroy every state head who shared a good bond with Trump 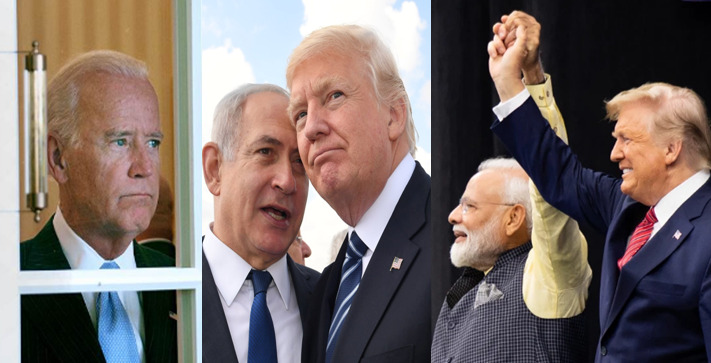 Joe Biden came to power with the promise of installing a team of adroit administrators and diplomats. But he has ended up bringing in a group of vengeful Democrats who want to punish every head of State or government who was close to Donald Trump. Biden is, of course, past his prime and probably lacks the ability to seek vengeance but his team is a pool of vengeful Trump-haters.

The Biden administration has thus been on a campaign to go after every such head of state or government who was friends with former US President Donald Trump. UAE President Khalifa bin Zayed Al Nahyan and De-facto ruler of Abu Dhabi Mohammed bin Zayed bin Sultan Al Nahyan, Israel’s PM Benjamin Netanyahu, Saudi Arabia Crown Prince Mohammed bin Salman (MBS), Japan’s PM Yoshihide Suga and India’s PM Narendra Modi- everyone who shared a good rapport with Trump is a potential target for the Biden administration.

Simply put, Biden’s team wants to “punish” everyone who was “close” to Trump. They have their reasons for doing so. Trump was the first non-establishment President of the United States. He was moving the Oval office away from the Deep State’s policy of starting and continuing wars, in a deep nexus with the military-industrial complex. The establishment cannot afford a Trump 2.0. So, the Biden administration is undermining Trump everywhere- both inside and outside the US.

Joe Biden isn’t exactly a vengeful man, because it takes brains to nurture vengeance. He lost his brains at least 5 years ago mostly due to biological reasons. But his administration is full of vengeful morons. They are trying to “punish” everyone who was “close” to Trump.

The pattern started with the United Arab Emirates- the first Gulf Nation to sign a US-brokered normalisation agreement dubbed “Abraham Accord” with the Jewish nation of Israel. The UAE-Israel Abraham Accord was signed when Trump was in power, yet the Democrats couldn’t and didn’t disapprove it. But they hated how the UAE President Khalifa bin Zayed Al Nahyan handed a major foreign policy to Trump by letting him broker the Accord.

So, when Biden administration came to power, the UAE lost defence contracts including the one for supply of fifth-generation, American F-35 fighter aircraft to the Arab nation. To make things worse, the Biden administration also re-imposed tariffs on Emirati aluminium.

MBS came next in line, broadly for the same reason as the UAE. When Arab nations like the UAE, Bahrain, Sudan and Morocco were handing major foreign policy wins to Trump, the Democrats would have expected Riyadh to get critical of the peace process and play spoilsport. However, MBS supported the Abraham Accords tacitly.

So, you might have noticed how Biden administration has been trying to take down MBS. The White House has been getting very critical of MBS over issues like human rights violations and journalist Jamal Khashoggi’s killing. Biden has also been trying to undermine MBS, the de facto Saudi Arabia ruler, and reach out to King Salman instead.

And to top it all, the Biden administration is also going after Israel, which has remained a faithful US ally since its very inception. But Democrats hate Israel’s PM Benjamin Netanyahu.

Obama, Joe Biden’s former boss, hated Biden. And since, Biden 1.0 is technically Obama 3.0, the hatred has been carried forward. Biden’s team hates Netanyahu even more, because Israel’s PM shared an excellent rapport with Trump and had even hugged him when he was the US President.

Biden has done everything in his control to hurt Israel. He didn’t call Benjamin Netanyahu for weeks after coming to power, as a symbolic snub. Alongside, he keeps strengthening Israel’s perpetual foes- Iran and Palestine.

This was Biden administration’s spiteful diplomacy in the Middle East. Now, we move on to the Indo-Pacific. The US has two key allies in the region- India and Japan. Interestingly, both of them had come very close to Trump.

The Biden administration thus decided to “punish” Tokyo. As tensions between Japan and China escalated over the former’s Senkaku islands in the East China Sea, Biden has effectively backstabbed Japan. Joe Biden’s instruction is to spread out American troops in the Indo-Pacific that basically implies abandonment of Japan.

To make things clear, US Defence Department spokesman John Kirby first supported Japan’s claims of sovereignty over the Senkaku islands and then in a bizarre turn of events, simply called his statement an ‘error’ which he ‘regrets’ making.

Finally, it is India’s turn. Now, Prime Minister Modi and former US President Donald Trump were buddies and enjoyed personal camaraderie. ‘Howdy Modi’ and ‘Namaste Trump’ were great political spectacles. For Democrats, it is unpardonable. Yet, India’s Prime Minister is too tall and popular a leader for the Democrats to take on directly.

So India is now a “partly free” country because some idiots from a moronic US Based think tanks think so. This is laughable. Nothing to beat India with so let’s cook up stories of “worsening civil rights”. pic.twitter.com/zCYJZPqqvS

Yet, the Biden administration won’t find it easy. We are not living in a unipolar, US-led world order that the American Deep State can manipulate. It is a multipolar world with regional powers that can counter propaganda and steer clear of what the Deep State wants the world to believe.