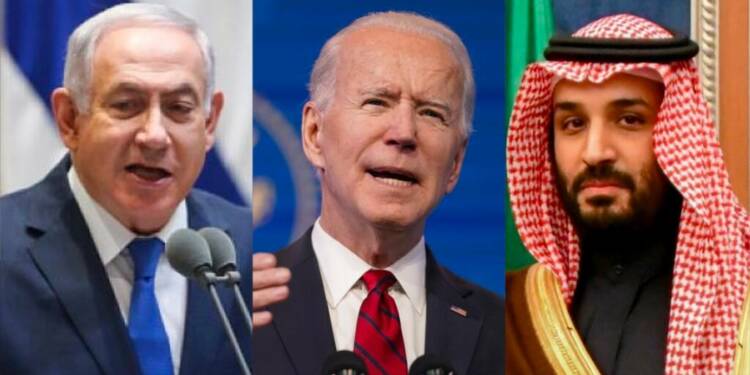 Joe Biden, in pursuit of returning to the Obama era, is unintendedly doing what Iran wants to do in the Middle East. The USA is going beyond the threshold to bring Iran back to the JCPOA. The US President, in addition to showering gifts on the adversary Iran, is also taking actions against its allies in the Middle East. In the process, he is getting America kicked out of the Middle East, something Iran has wanted for years to happen. There is no dearth of facts when one looks for ways in which Biden’s Middle East policy is hurting allies and the US alliance structure while benefiting the Iranians, who want nothing but the worst for the USA and its allies in the region. Be it the most recent report by the USA implicating Saudi crown prince Mohammad Bin Salman (MBS) in the killing of Jamal Khashoggi, or the overt sidelining of Israel’s Prime Minister Benjamin Netanyahu among many others.

All these actions will surely culminate in the realisation among the Abraham Accords members and the allies of the USA that, if Biden is not supporting them, they need to come together to tackle all the challenges without the active support of the USA — signs of which are already bourgeoning.

Recently the Biden administration had shied away from calling Saudi Arabia and Israel as its close allies and the fact that Israeli PM Netanyahu was one of the last foreign leaders who received a call from Joe Biden has only widened the wedge. While the initial hesitation of communication with Israel was dubbed on Biden’s yet to be devised ‘Middle East policy’ but going by the media reports swirling around, it appears that the Democrats are scheming a plot to ensure that Benjamin Netanyahu does not get re-elected in the upcoming elections, just because he hugged former President Donald Trump and had an excellent personal camaraderie with him.

On the other hand, Joe Biden did not even call MBS and sidestepping him, called Saudi King Salman. Also, a US intelligence report released on Friday, said that Saudi Arabia’s de facto ruler, Crown Prince Mohammed bin Salman, approved an operation to capture or kill journalist Jamal Khashoggi in 2018. These developments seem to create instability in the Kingdom of Saudi Arabia and maybe an attempt by Joe Biden to get MBS unseated as the prospect heir to the throne.

Read more: A toothless measure with a huge cost: MBS won’t be penalized, and American Muslims will be enraged.

All of this is happening while the Biden administration has restored aid to the Palestinians and appointed Robert Malley as the next US special representative to Iran, who was involved in the Obama era JCPOA deliberations and even held talks with the Iranians while Donald Trump was following high-pressure policy on Tehran.

Emboldening Iran to get it back into the JCPOA, is hurting the prospects of the presence of the USA in the Middle East. Joe Biden’s bid to challenge the leadership of MBS and unseat him is going to backfire and instead, it will catalyse the Saudi prince’s efforts to consolidate power and holdover the Kingdom.

The US allies in the region will not accept how Joe Biden is treating them, and will soon reach an understanding to consolidate themselves under the umbrella of the Abraham Accords. This will make the utility of Washington as a superstructure to keep bickering allies together.

Jerusalem is already negotiating the formation of a four-nation defence alliance with the kingdoms of Saudi Arabia, Bahrain, and the United Arab Emirates. As these relations and alliances solidify, the US hand will become weaker in the Middle East. In such a situation, these actions against its allies and the leaders of these countries will end up becoming counterproductive. These actions to unseat Netanyahu and MBS coupled with an over the top appeasement of Iran and re-opening of the Palestine issue will push America out of the Middle East forever, making Biden doctrine the goto expression for the worst foreign policy blunder pursued consciously.