The first international embarrassment for Biden, he was forced to take his words back by India, Japan and Australia 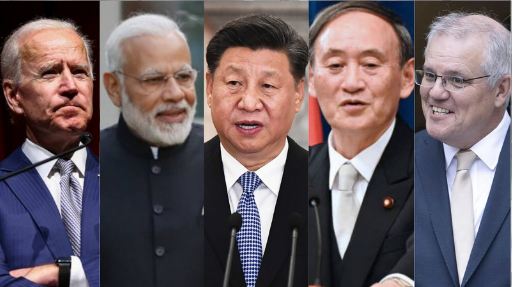 US President Joe Biden tried his best to go soft on China even at the cost of undermining the Quad- an informal strategic forum comprising of frontline Indo-Pacific powers- India, Australia, Japan and the US. The Quad remains an anti-China platform at large and former US President Donald Trump used to be its leading face, which did not go in line with Biden’s personal preferences.

Yet, Biden had to agree with the other three Quad allies on the Indo-Pacific concept and China containment, which remain the main concerns of the quadrilateral alliance. The US Secretary of State Antony Blinken emphasised ensuring a “free and open Indo-Pacific region” as the central cause of Quad during the annual meeting of the Foreign Ministers of the Quad nations on Thursday.

Now, this is a big embarrassment for Biden as he has been compelled to agree on the “free and open Indo-Pacific” concept by Washington’s Quad allies.

As soon as Joe Biden came to power in the United States, he made attempts to undermine his predecessor Donald Trump’s Indo-Pacific vision. Japan had conceptualised the “Free and Open Indo-Pacific (FOIP)” concept but it was Trump who championed it by isolating China- the main threat to a rules-based order in the region.

Right from the word go, Biden was doing things to show that he was not comfortable in continuing the Trump era’s practice of promoting anti-China activity. Initially, the 78-year-old tried to ditch anti-China “Indo-Pacific” terminology in favour of a pro-China, “Asia-Pacific” language.

This was quite significant as the Indo-Pacific is a geopolitical concept that was developed in response to Chinese belligerence and expansionism. By trying to replace the usage of “Indo-Pacific” with “Asia-Pacific”, Biden was refusing to continue Trump’s policy of directly addressing the China threat.

When Biden finally talked about the “Indo-Pacific”, he was found diluting the entire geopolitical concept altogether. FOIP implied maintaining a rules-based order and upholding the rule of law as well as freedom of movement in the entire region. It is a necessary corollary that checking Chinese aggression in the East China Sea, the South China Sea and even the Himalayas were the topmost priorities in the Quad agenda.

Yet, in his interactions with the Quad allies, Biden was using a new phraseology- “secure and prosperous” Indo-Pacific. The stress on maintaining freedom of movement and openness in the region by containing the China threat suddenly went missing. Biden’s idea of a “secure and prosperous” Indo-Pacific implied that the US may abdicate the responsibility of promoting the primacy of international law in the region and this gave greater breathing space to the paper dragon.

However, Biden’s reluctance to take the Quad’s Indo-Pacific narrative forward hasn’t stopped Washington’s Quad allies from following the ground norms that were set for the informal alliance while Trump was in power. So, Japan has continued its brutal economic offensive against Beijing with the sole purpose of wreaking havoc on the Chinese economy.

Moreover, despite Biden’s soft approach towards China, Tokyo has sought to beat back Chinese maritime aggression in Japanese waters in the East China Sea. With Biden in power, China has been trying to intensify intrusions into the Japanese waters near the Senkaku Islands. Tokyo, however, remains steadfast and the Suga government has been advancing Japan’s military modernisation programme in a bid to push back against the growing Chinese aggression.

As for Australia, the Scott Morrison government too, has sought to improve its military preparedness, given Beijing’s attempts to disturb peace and tranquillity in the Indo-Pacific.

Earlier this month, Australia’s Minister of Defence announced a massive investment in the production and acquisition of new air defence and anti-ship missiles, sophisticated torpedoes, and naval vessels. The Morrison Government will invest $1 billion to commence the early development of advanced guided weapons to enhance Australia’s maritime security.

India too has shown the intent to lead the spirit of anti-China activity in the Indo-Pacific. India has emerged as the pharmacy of the world and has taken the lead in manufacturing vaccines that are being shipped to different parts of the world. New Delhi is saving millions of lives from the virus that was manufactured by China in 2019. India has beaten China comprehensively in the vaccine war and Beijing’s vaccine diplomacy has flopped all across Asia.

Even amongst themselves, India, Japan and Australia have shown the ability to uphold the spirit of anti-China cooperation despite the Biden administration’s inconsistent and uninspiring policies.

Australia, for instance, has put India first in the supply chains and Japan too has shown the will to cooperate with other Quad allies despite Biden’s absurd China policy.

Together India, Japan and Australia did not show any signs of succumbing to Biden’s plans for going soft on China and changing the fundamental character of Quad cooperation. Washington’s Quad allies have coordinated their push back against the China threat and they have also refused to come out of the Trump era policies. Biden understands that he cannot annoy US allies for far too long and finally he has given in.

Biden has been forced to take back his words. He has been made to realise that China is the biggest threat and that he needs to focus more on China than on Russia. This is an outright embarrassment for the US President, as he has had to agree on something against his will.

India, Japan and Australia have thus shown that there are certain limits that Biden can’t transgress and he may as well have to keep following the broad spirit of Trump’s foreign policy, especially in the Indo-Pacific.