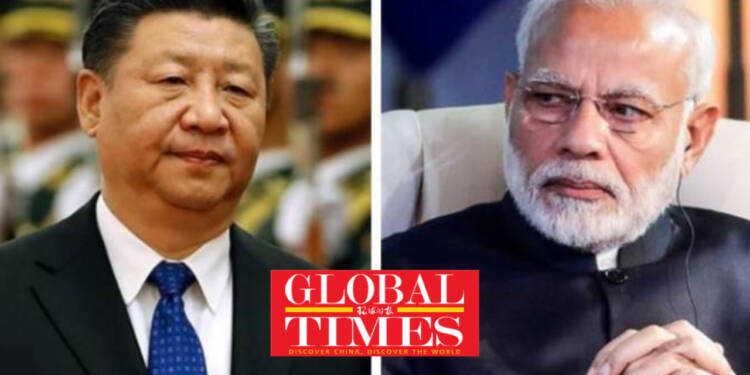 In the race to provide vaccines, India has edged out China. China’s attempts to coax other countries to take the Chinese vaccine have failed. But after admitting defeat in the field of vaccine diplomacy, the CCP propaganda outlet Global Times is trying to smear India’s vaccine outreach program like a sore loser.

India’s vaccine diplomacy has been more robust and successful than China’s. Indian made vaccines have been requested by Cambodia, Brazil, Bhutan, South Africa and many other states worldwide. While China’s vaccine drive has flopped due to its inefficiency and poor efficacy numbers, Indian vaccines have been tagged reliable and safe as even the Pfizer and Moderna vaccines have come under intense scrutiny for not being safe. Thus, Indian Vaccines have been hailed and are in demand worldwide as China fails to set up shop for its failed vaccines.

Through its ‘Vaccine Maitri’ initiative, India has already gifted the Covishield vaccine to all SAARC countries except Sri Lanka, Pakistan and Afghanistan. Covishield is India’s indigenous vaccine manufactured locally by Serum Institute of India.

In a Global Times article titled,’ India’s capacity to produce high-quality vaccines questioned after a fire’, questions have been raised on India’s capability. It has questioned India’s ability to produce vaccines to match its ambitions. The questions mainly arise after an under-construction facility of Manjari that was scheduled to become operational in a month or so was engulfed in a massive fire.

The article then goes on its long rant of how India’s factories are prone to fires caused by electrical faults and India has chosen to bite more than it can chew. Global Times then went on to explain how Indian vaccines cannot be trusted as the Covishield has not completed a “bridging study”. In regards to the bridging study, the Serum Institute of India has reported to the BBC that the study in question will be completed in February.

SII’s CEO Adar Poonawalla had tweeted and assured that the fire will not impact the firm’s ability to produce vaccines. He said, “There will be no impact on vaccine production as the company has other facilities kept in reserve to deal with such contingencies.”

India started one of the biggest inoculations drives on Saturday, including its commitment to provide 1 crore vaccines to its neighbours excluding Pakistan. Whereas on the other hand, China has had little to offer in the region.

China’s vaccine push had failed as its vaccines failed to display efficacy. As a result, only Pakistan had opted for Chinese vaccines, mostly because it trusts the paper dragon more than India.

Unlike India, China approved its vaccine for local use with only 79.3 per cent efficacy. Even the World Health Organisation which worked for hand in glove with China’s President Xi Jinping to unleash the pandemic upon the world has approved only five Chinese vaccines for export compared to 47 vaccines from India.

Moreover, China’s aggressive diplomatic tactics have infuriated the South Asian nations. The political conditions attached to the export of Chinese vaccines has been rejected by India’s neighbours and along with China’s vaccines themselves. Additionally, China’s decision to inoculate more than 1 million of its citizens with Sinopharm doses without even completing full trials is a testament to how China cares little about the welfare of its people, let alone citizens of other countries.

Though China did admit defeat, it has been unable to digest the fact that India has edged out China in South Asia. Even China’s close ally Cambodia recently requested India for vaccines despite having received a million doses of Chinese vaccines. Global times has had a bad case of indigestion as it cannot accept that China, a growing superpower has been left in the dust in South Asia, a region China tries to label as its sphere of Influence.