After choking China economically, Australia is developing naval capabilities to take the paper dragon head on 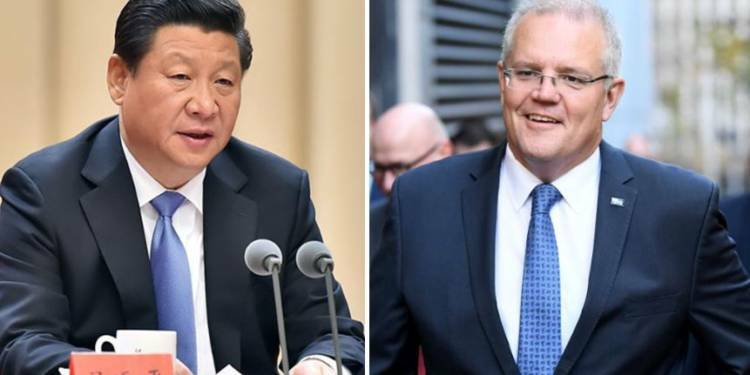 Australia fought unofficial Chinese bans on imports with valour and emerged victorious. Now it is enhancing its navy to deter Chinese dominance in the open seas starting with a $1 billion outlay.

After Trump’s departure, Xi Jinping would’ve hoped that the Australian Prime Minister would relent on China’s animosity and would offer an apology. Instead, Scott Morrison refused to budge. He emboldened Australian patrolling in the South China Sea, criticised China on Hong Kong, and stopped the import of goods from China’s Xinjiang region. Now Morrison is ready to take the Chinese threat head-on.

Australia’s Minister of Defence announced a massive investment earlier this week in the production and acquisition of new air defence and anti-ship missiles, sophisticated torpedoes, and naval vessels. The Morrison Government will invest $1 billion to commence the early development of advanced guided weapons to enhance Australia’s maritime security.

Defence Minister Linda Reynolds said these new capabilities would “provide a strong, credible deterrent to ensure the region’s stability and security,” by enhancing the capacity of the Australian Navy to project and maintain sea control.

“The planned acquisitions – when aligned with the ongoing state-of-the-art combat system development and National shipbuilding programs – represent an investment of up to $24 billion, which will build a lethal and highly responsive Navy for decades to come.

“This investment is part of the Morrison Government’s $183 billion Naval Shipbuilding Plan, which will see up to 23 classes of vessels built here in Australia, creating thousands of jobs and significant opportunities for Australian industry.” The defence minister outlined.

The anti-air and anti-ship missiles expected would have ranges of over 370 kilometers and missiles more than 1,500 kilometers away will be capable of reaching land targets.

The production of the Evolved Sea Sparrow missile and advanced versions of the SM-2 and SM-6 anti-air missiles will be part of the investment. The Sea Sparrow has a relatively limited range but offers effective protection for warships against modern, high-speed anti-ship missiles. The SM-2 has longer range and is usually used against both fighter jets and enemy missiles.

Australia’s advanced weapons spending spree is motivated by increasing concern about China’s belligerence. With an arsenal of more advanced, longer-ranged weapons Australia can contribute more effectively to a combined effort with the United States to deter potential Chinese aggression.

Trump had done enough to inspire states to get their defences bolstered to deter China. With Biden in office now he is sending clear signals to its allies to not act against China by reviewing and reversing all of Trump’s decisions.

Biden is losing allies and reversing the gains made by Trump. The former US President had crafted a leadership role for the White House in the Indo-Pacific by seriously coming down on China. But instead of taking a lead, Biden is busy reversing all the gains.

Australian Prime Minister Morrison on the other hand has kept the flame alive. He has single-handedly dealt a major economic blow, the magnitude of which has made Chinese cities go dark and industries forced to shut operations.

The Indo-Pacific has emerged as a major geopolitical arena. Australia has shown once that it can take on China in the economic tussle. Now the Aussies are sharpening their teeth in case China needs to be bitten on the seas.

Obama hated Netanyahu. Biden doesn’t love him either. But Netanyahu hates them both equally