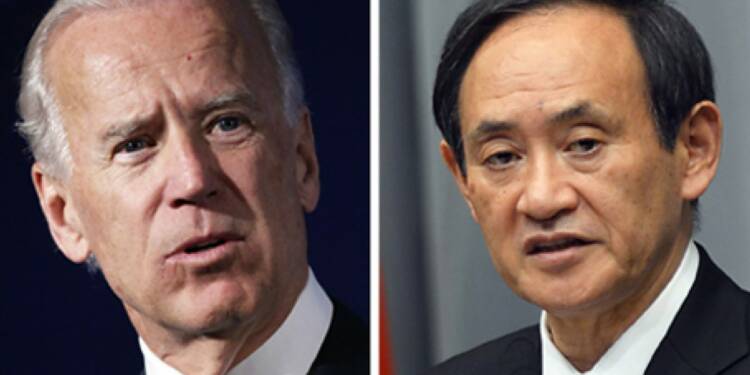 Joe Biden’s first month in office was a nightmare for USA’s allies in the Middle East and Indo-Pacific, as the whole pitch was based on the premise to woo China and Iran. In the process, Joe Biden tried to subtly abandon these regional allies. However, the fact that is considering to send its armed forces to deal with a surge in Chinese activity near the Senkaku Islands tells us that the Japanese are not willing to relent.

In the face of a resolute Japan which is willing to send its forces to Senkaku Island to fight the Chinese threat, Joe Biden is forced to reset his foreign policy direction in East Asia. U.S. President Joe Biden is planning to host Japanese Prime Minister Yoshihide Suga at the White House as soon as April to make amends. The amount of importance the USA is laying on the visit can be gauged from the fact that it would be the first in-person foreign leader visit of his presidency.

Tokyo has shown that it will keep up its aggressive stance against China both economically as well as militarily, be it with or without the USA’s assistance. Japan is in no mood to relent and keep up the façade of placating Beijing and praying that it does not launch an attack. Now, Japan is willing to be assertive and aggressive in safeguarding its territories in the face of Chinese adventures in the East China Sea.

Recently, the USA has revamped its Indo-Pacific policy and what may sound an attempt by the USA to refocus on the geopolitical hotbed, is, in reality, a sly attempt by the Biden administration to save itself from any possible Chinese missile threat and for that, it is willing to leave regional allies in a lurch.

The Biden administration has been trying to project the troop repositioning in the Indo-Pacific as a positive development that will make the USA’s posture in the region more ‘agile’ and secure the US troops from advanced Chinese missile offences. Yet, at the core of the troop repositioning lies the fact that American forces will need to be taken out of permanent bases and shifted to more non-traditional venues across the contested region.

The dispersal programme being executed by the Biden administration at permanent bases in locations such as Yokosuka, home of the Navy’s 7th Fleet and where 12 large warships are stationed; and Okinawa, where more than half of the 50,000 U.S. military personnel stationed in Japan are located will most definitely lead to a vacuum of allied forces for Tokyo.

All this has made Japan more aware of the situation and it has realized that relying on Joe Biden to come to Japan’s rescue in an event of Chinese misadventure would be the worst possible calculation. This is why it has adopted a more practical approach of aligning with India and other major world powers with interest in the Indo-Pacific region.

The Japanese government is capable enough to create an anti-China front minus the USA. Given the inclination of countries like France, the UK, Germany and Russia to maintain a free and open Indo-Pacific and in a way are willing to contain the ever-growing overbearing of the Chinese Communist Party. This reality has shaken Joe Biden and his courtiers to a great extent. It has forced the Biden administration to surrender its destabilizing foreign policy and reset its foreign policy approach towards Japan. He also had to emphasise “Free and Open Indo Pacific” in its statement, retracting from the Biden administration’s flawed “Secure and Prosperous” Indo-Pacific strategy.

The news of Joe Biden inviting Japanese Prime Minister Yoshihide Suga is also coupled with the emergence of reports of U.S. Secretary of State Antony Blinken and Defense Secretary Lloyd Austin making arrangements to visit Japan next week for talks with their counterparts, according to Asia Nikkei.

Japan has for the longest time been the most reliable US ally in the Asia Pacific geographical stretch. It has been standing shoulder to shoulder with its US counterparts thick and thin since the end of the second world war. However, only a month of disastrous Biden foreign policy vis a vis Japan was enough to bring such a good friend into an extremely vulnerable situation.

This is why Japan was looking for options other than being idealistically foolish to expect the USA to show up in case of uncontrolled escalations with China. Japan by its actions and by showing its capabilities has forced Joe Biden to reset its foreign policy approach concerning Japan.