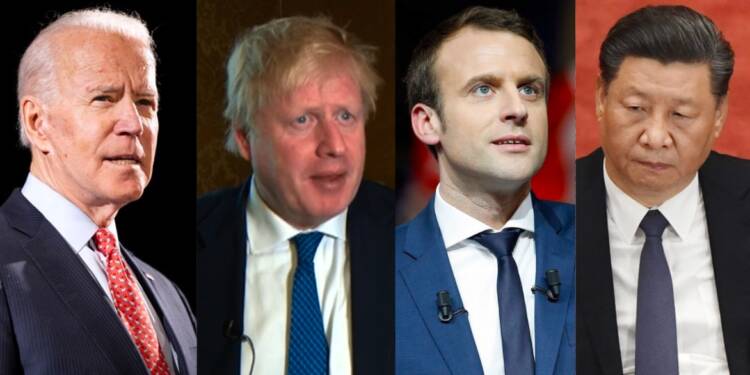 Joe Biden has effectively subdued the Quad with his soft China policies and his policy on ‘Indo-pacific’. Now, the UK and to a larger extent, France are keen on joining the alliance to contain China whether Biden likes it or not.

It is now widely believed that the UK, could be poised to Quad, to restrain Chinese ambitions. With Britain lining up what Dominic Raab has called an ‘Indo-Pacific tilt’ after it departed from the EU, membership in the ‘Quad’ would enlarge an alliance of countries who have all clashed with an assertive Beijing in recent months.

While no firm proposals have been put to Boris Johnson so far, there is thought to be an ‘appetite’ in the UK government to join the alliance. On a visit to India in December, Raab was quoted as saying that there was ‘nothing ruled out’ after he discussed the Quad with his Indian counterpart.

UK Prime Minister Boris Johnson is promoting the idea of a “global Britain,” seeking opportunities worldwide after being freed from the constraints of the EU. Asia is a natural and important target of the initiative, given the region’s economic growth and rising trade volume with Britain. But Johnson’s stance toward China is harsh.

In recent times, the UK has feuded with China on several issues, the latest being UK’s criticism of the WHO inquiry into China. Issues including, Hong Kong, Taiwan and the South China sea has also been grave points of contention between the two states.

Moreover, a new ‘quasi-alliance’ between the UK and Japan will strike fear into the hearts of the Chinese as it hearkens back to the 1902-23 Anglo-Japanese Alliance that changed the dynamics of Asia.

An expert in the field said, “You should not forget that the old Anglo-Japanese Alliance not only was aimed at countering Russia but also it had a hidden agenda of containing China’s national rejuvenation.”

On Feb. 3, a “two-plus-two” meeting of Japanese and UK foreign and defence ministers was held. Ministers from both sides shared “grave concerns” about China’s political crackdown in Hong Kong and human rights issues in Xinjiang. They also expressed strong concerns about Beijing’s new Coast Guard Law, which came into force on Feb. 1, which positions the China Coast Guard as a quasi-military organisation and allows it to fire at foreign ships.

Moreover, on the day of Biden’s swearing-in ceremony France, Japan and India came together to form a strategic triangle to back the Indo-Pacific vision to counter China. The need for such strategic triangle emerged amid apprehensions over Biden administration’s policy on China. It has been three weeks now and those apprehensions still hold true as US policy over China has shifted from a threat to ‘strategic patience’.


Thus, the UK and France’s greater engagement with Quad member and countries and a willingness to engage actively in the region to contain Chinese belligerence is a welcome sight. Moreover, it is also a strong message to Biden and his policy on China. All these countries have been strong US allies and despite Biden receding the USA’s influence over the region by not engaging with China, these states have come forward to do just that.