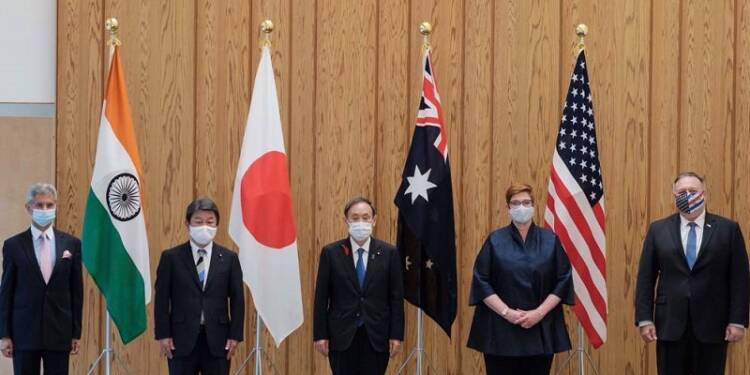 The 46th President of the United States of America is now ensconced in the White House, and his failure to coordinate with the US allies is already hurting the free world. The first casualty however seems to be the Quad- an informal, anti-China strategic forum comprising Australia, Japan, India and the US. The Quad had become China’s biggest headache with Trump in the White House. But things are changing with Biden’s accession to President.

Washington’s Quad allies were not very keen on a Biden administration coming to power for their own reasons. And now Biden has made a move which is bound to make Quad allies very angry.The former US President Trump was leading a campaign against the Chinese 5G technology. He was forcing the free world to snub Chinese 5G leaders Huawei and ZTE. But Biden seems to be undoing that.

Shortly after coming to power, one of the first things that the Biden administration did was to update the website of the US State Department. The website has updated China’s country profile page. With the Trump administration, the profile read, “the Chinese Communist Party: threats to global peace and security,” but now it states, “US relations with China”.

Two of the issues flagged by the Trump administration- 5G security and China challenge, have also been removed by the Biden administration. So, the Quad allies can interpret two things- one, Biden doesn’t consider China’s rise as challenging or dangerous and two, the new US administration will not cooperate on the 5G security issue.

Now, this is rather troublesome, as Trump’s battle against the Chinese 5G over security concerns was one of the topmost priorities for the Quad. Countries like Australia were some of the first ones to exclude Chinese telecom giants Huawei and ZTE from its 5G networks, in coordination with the White House.

Also, India and Japan were supposed to be leading the non-Chinese 5G tech race. The US was expected to put its weight behind such Quad efforts to develop its own 5G for the free world. The former US Secretary of State Mike Pompeo had even described India’s telecom leader Jio as one of the “Clean Telcos” for “rejecting doing business with tools of the CCP surveillance state, like Huawei.”

Japan’s Rakuten should also have been a go-to choice for the US. The Japanese tech company isn’t just free from the Chinese influence but is also collaborating with the American companies in its 5G programme.

But if Biden’s initial actions suggest that he has absolutely no problem with the Chinese 5G. The American campaign against the Chinese telcos ended as soon as Trump left the White House.

And 5G tech is just the beginning. Remember, how Biden has also refused to acknowledge how China is not a challenge for his administration. So, Biden is likely to go soft on Beijing on many fronts, which could cause further anguish amongst the US’s Quad allies.

As for Japan, the Quad remains central to its vision of Free and Open Indo-Pacific. But now Biden is undermining the Quad itself. The Suga administration is also concerned that if Biden gets too soft on China, then he may even refuse to intervene in the Senkaku Islands dispute in the East China Sea.

Read More: On Day zero of Biden, India-Japan and France launch a parallel Quad like body to counter China

Finally, Australia endured a major trade war against Beijing only because it felt that the US would uphold the Quad’s centrality. But with Biden, US-Australia ties are likely to run into trouble. Firstly, Biden is unlikely to punish China and secondly, the new US President is expected to mix up Climate Change and diplomacy. Canberra is unfortunately one of the main agendas in Biden’s Climate Change rhetoric.

Biden’s accession to President is not a good news for anti-China hawks around the globe, as it might as well mean a premature death for the Quad- the most powerful anti-China alliance in the world.