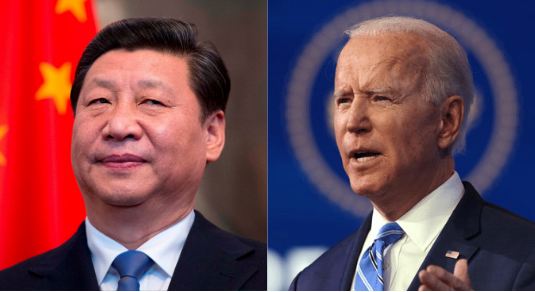 The US President has chosen a very different approach on how to engage with China, shower China with love and avoid conflicts. Sadly, for him, the Chinese President Xi Jinping has wasted no time in cutting through the clutter and has announced how he views the United States as the, “biggest source of chaos” and the “biggest threat” to China.

Xi Jinping has adopted a confident demeanour as he seeks to ensure China’s stability and power in the post-Covid era, declaring that the country is entering a period of opportunity in which “the East is rising and the West is declining.”

A county official in northwest China recounted a speech made by Xi Jinping last week. He recounted that Xi had said, “The biggest source of chaos in the present-day world is the United States,” he added, “The United States is the biggest threat to our country’s development and security.”

The warning, which has been reiterated in recent public statements by senior officials close to Xi, emphasises how Jinping is attempting to strike a balance between trust and caution as China moves forward while other countries struggle with the pandemic. His statements represent an attempt to hold China on edge because, despite its domestic success, it is viewed with suspicion in Washington and other Western capitals.

While Xi has emboldened belief in China that the United States is the biggest threat and identified it as the biggest source of Chaos on the planet, the USA, under the leadership of Joe Biden, is singing a different tune.

Biden then expressed a deep sense of pride about how he has a close and personal relationship with the tough guy- Xi Jinping.

The US President claimed that he knew Xi “pretty well” after working as Obama’s wingman for eight years. Biden added, “I’ve probably spent more time with Xi Jinping I’m told than any world leader has.”

Biden is actually ensuring that Beijing realises how he has no plans to flare up the US-China rivalry. The US President said, “The question is, I’ve said to him all along, that we need not have a conflict.”

Biden is being true to his words when he said that he wants no part in a conflict with China, even though it has come at the cost of irking the closest of the US allies. In a move that will sour Japan-US ties, the US Defence Department spokesman John Kirby has offered a clarification over the statements he made earlier, whence he underlined the US support to Japanese claims of sovereignty over the Senkaku islands which China claims and calls the Diaoyu. The clarification not only rescinded the previous support. but has also watered down the level of protection Donald Trump had offered to Japan.

Moreover, Biden went easy on the trade wars which were a critical strategy of the USA under Donald Trump to make China bleed. Besides, Huawei and other 5G companies were given a clean chit from tags of posing a critical national security threat and were removed from the US State Department website.

Biden also tried to change the indo-pacific narrative, by stating he is in favour of a “secure and prosperous” Indo-Pacific deviating heavily from the Free and Open Indo Pacific concept which brought the Quad together. Unanimously other members of the Quad rejected Biden’s idea of the Indo-Pacific.

The worst of all the actions was Biden’s attempt to paint a very non-radical picture of the genocide in Xinjiang. He called the failure of Xi Jinping to speak on the genocide of Uighur Muslims part of a “different norm”

But it seems that all of Biden’s effort to profess his love to the CCP and Xi Jinping is going in vain. While Biden tries to show support and love to China, Jinping has identified his targets and at the same time has also identified the USA as its biggest roadblock in achieving those targets. Jinping through his statements has made it clear that his only aim is the rise of the East (China) at the cost of the West (USA).