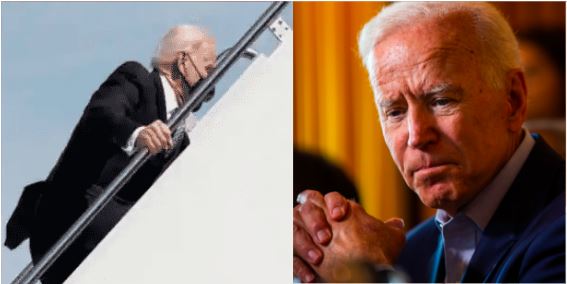 Social media has been flooded of late with visuals of President Joe Biden losing his balance due to a misstep perhaps, and then, going on to stumble no less than three times as he was boarding the Air Force One while departing for Atlanta from Joint Base Andrews in Maryland. The video, which has taken the internet by storm, has become a major laughing point for many. However, one cannot help but feel sorry for Joe Biden, who is forcefully being made to work by the Democrats as President, despite him being 78 years old.

Visuals of the septuagenarian stumbling thrice, and getting up himself go on to prove how President Joe Biden should be anything but the American President at 78 years of age. Joe Biden should be relaxing, playing with his grandchildren and taking Major – his pet dog for walks. He should not be at the helm of affairs in America, solely due to the ineptitude of the Democratic Party to come up with good presidential candidates. One can, for a multiplicity of reasons, not like Joe Biden. What one cannot be is unsympathetic to his woes.

As an old man – cognitive non-functionality, lethargy, lack of mindfulness are all things coming naturally to Joe Biden. Would he not fix these problems if they were under his control? Yet, that he cannot, due to his age, is reason enough for Democrats to be ashamed of themselves for fielding him as their presidential candidate. The leader of the United States of America must be a strong, dynamic and capable person. By virtue of his age, Joe Biden is not being able to fit any such criteria.

Joe Biden only recently referred to Vice President Kamala Harris as ‘President Harris’. He also forgot the name of Defence Secretary Lloyd Austin. This, apart from the many fumbles that the man has had over the past year. Even Democrats themselves consider Joe Biden inept for the job. TFI had reported how Democrats led by Reps. Jimmy Panetta (D-Calif.) and Ted Lieu (D-Calif.) wrote a letter to Joe Biden asking him to renounce his sole authority on the nuclear launch codes of the country.

In a brazen display of insensitivity, Democrats and White House staff are swearing that the President, after his nasty fall, is doing perfectly fine, to the extent that he did not even need doctors to check on him. Officials insisted there was no damage done.

The White House claimed that Biden stumbled upon the stairs as it was a windy day. Karine Jean-Pierre, the deputy White House press secretary, told reporters on Air Force One, “It’s very windy. I almost fell coming up the steps myself. He is doing 100 per cent fine.”

Politics aside, what the current President is being made to go through should put the Democrats to shame. They are putting the United States at an unprecedented risk by having someone in the White House who can barely walk and speak straight – as is the case with almost everyone in his age group. Fox News’ Sean Hannity best described the situation America is in right now, as he said, “The whole world can see what we see every day, including hostile regimes, hostile actors and America’s enemies. Look at Vladimir Putin, openly mocking the President of the United States of America, challenging him to a debate and then saying ‘I hope you’re better, I hope you’re feeling better, good health.’ The Chinese are now literally spitting at the U.S. and our public image on a public stage like they did yesterday. It was a disaster. Then we had grovelling and another apology tour beginning. The mullahs in Iran, they are emboldened. This is now a nightmare scenario.”