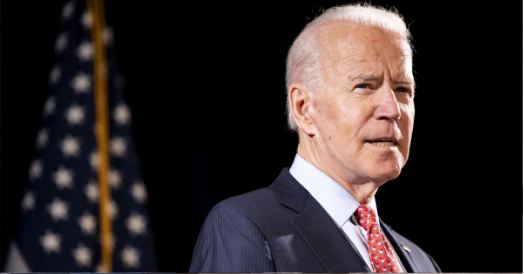 Joe Biden is becoming the epitome of embarrassment and irony- in theory, he is the strongest man on the planet and yet, in practice, he is acting as an unbelievably incompetent man. In fact, Biden’s incompetence is now going way over the top by diluting the stature of US Presidency. Biden’s Presidency is eroding some of the most enviable powers like control of nuclear launch codes and war powers that are popularly associated with the US President.

Now, we do know that Biden is only going to get older. With the passage of time, he might even lose the ability to keep those who want to hijack his administration at bay. And therefore, influential Democrats like Vice-President Kamala Harris and House Speaker Nancy Pelosi, who are running the real show behind the curtains, might overpower him. As such, the Democrats want to steal two powers from Biden- nuclear launch codes and war powers.

Recently, TFIGlobal reported that as per New York Post, Democrats led by Reps. Jimmy Panetta (D-Calif.) and Ted Lieu (D-Calif.) wrote a letter to Joe Biden asking him to renounce his sole authority on the nuclear launch codes of the country. Sounds outrageous, right? Actually, it only gets worse.

The letter read, “As president, two of your most critical and solemn duties are the security of the country and the safeguarding of its nuclear arsenal.” While the letter starts cautiously by giving respect to Biden’s authority, it soon brings him down as it states that he cannot be trusted with the code-duties. “However, vesting one person with this authority entails real risks,” wrote Panetta and Lieu in the letter to Biden.

The abominable demand actually came from an influential leader. Panetta is the son of Leon Panetta, who served as Defense Secretary and CIA director under President Obama and was the chief of staff to President Clinton. So, don’t be surprised if the request for relinquishment of power to control nuclear launch codes gets effectuated.

The position and stature of the US President is unfortunately only getting deteriorated further. Sens. Tim Kaine and Todd Young have introduced a bipartisan legislation that seeks to rob the US President of decades-old authorisation to use military power in the Middle East.

The bipartisan Bill would repeal the 1991 and 2002 authorisations which armed the US President with unfettered military powers to tackle the prolonged conflict in Iraq. The Congress has abdicated most of its Constitutionally mandated war powers. But the Kaine-Young Bill only concerns the above two Middle East authorisations.

The move comes as a consequence of the backlash following Biden’s decision to launch airstrikes in Syria last week without seeking Congressional approval. The US President’s powers to wage wars in the Middle East are under a real threat. In fact, lawmakers from across the political spectrum like Sens. Tammy Duckworth (D-Ill.), Mike Lee (R-Utah), Chris Coons (D-Del.) and Chuck Grassley (R-Iowa) have signed onto the Kaine-Young legislation as co-sponsors.

So, Biden is actually facing a double whammy here. And his decision to launch airstrikes in Syria seems to have caused more harm than good. Democratic lawmakers like Tim Kaine, Chris Murphy and Ilhan Omar have questioned his decision to order the airstrikes. On the other hand, Republicans can’t help but point out Biden’s hypocrisy, as he used to question Trump’s aggressive military moves in the Middle East and “actions in Syria”.

From Bibi to Modi: Biden is trying to destroy every state head who shared a good bond with Trump