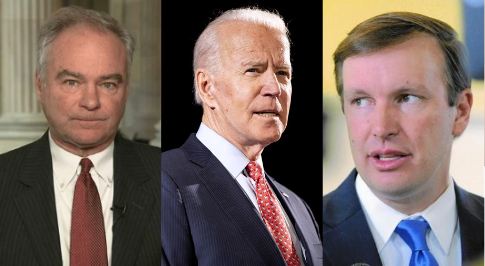 Joe Biden came at the helm of affairs as the US President on January 20 this year. He has been in power for more than 40 days now, and ever since he assumed office, there has been a sense of unison amongst the Democrats. The Democrats have been covering for each other and showing an unprecedented sense of unity. But all that changed on February 25, when the US President ordered a military strike in Syria.

Biden’s stated purpose for the Syria airstrike was ‘in response to recent attacks against American and coalition personnel in Iraq.’ But this argument has found only a few takers. Rather, old tweets from top Democrats like Kamala Harris and Joe Biden himself are resurfacing, which expose the hypocrisy on the Biden administration’s part. Worse still, some Democrats have spoken up against the airstrike in Syria showcasing the divide caused by Biden’s rash decision.

First and foremost, the reactions from certain Democrats have shed the light on how the attack on Syria is a contentious matter which could haunt the Biden administration for a long time. Take a look at what Sen. Tim Kaine, D-Va., a member of the Senate Armed Services Committee, has to say.

A statement from Kaine’s office read, “The American people deserve to hear the Administration’s rationale for these strikes and its legal justification for acting without coming to Congress. Offensive military action without congressional approval is not constitutional absent extraordinary circumstances.”

Another Democrat, Sen. Chris Murphy, said, “Congress should hold this administration to the same standard it did prior administrations, and require clear legal justifications for military action, especially inside theatres like Syria, where Congress has not explicitly authorized any American military action.”

The Syria strike is going to be a bigger issue for Biden than you can imagine. Even far-left Democrats like Ilhan Omar, who had backed Biden for the Presidency with all their might, have shown hints of disappointment.

Make no mistake, the attack on Syria is quite hypocritical on Biden’s part. Even more worryingly, it can destabilise the Middle East irreversibly.

The strike targeted facilities near the Iraqi border used by Iranian-backed militia groups. So, it might help Biden in using the attack on Syria as a giant smokescreen to find some breathing space on the Iran front. It might even help him in moving forward towards the revival of JCPOA, or the Iran nuclear deal. But the attack actually does a lot of harm to the region by agonizing different players like Syria and Russia.

Anyhow, what puts the Democrats in an even more uncomfortable position is their past statements about US attacks on Syria while Trump was the President. Today, Jen Psaki serves as the White House Press Secretary. So, she is supposed to support whatever the Biden administration does. But in 2017, when Trump ordered strikes in Syria, as a response to the latter’s use of chemical weapons, Psaki had tweeted, “…what is the legal authority for strikes? Assad is a brutal dictator. But Syria is a sovereign country.”

Also what is the legal authority for strikes? Assad is a brutal dictator. But Syria is a sovereign country.

Even Kamala Harris, who now serves as the US Vice-President, had criticised Trump after another US military strike in Syria in 2018. At that time, she had tweeted, “I am deeply concerned about the legal rationale of last night’s strikes.” Harris had then added, “The president needs to lay out a comprehensive strategy in Syria in consultation with Congress — and he needs to do it now.”

I strongly support our men and women in uniform and believe we must hold Assad accountable for his unconscionable use of chemical weapons. But I am deeply concerned about the legal rationale of last night’s strikes.

Kamala wanted the US President to consult the Congress before ordering any attack on Syria. Fair enough. But now that Biden is the President, she thinks that the Congress doesn’t really get to have a say.

And then we come to the man of the moment- Joe Biden himself. In October 2019, he had tweeted, “This afternoon, I’ll be discussing Donald Trump’s recent actions in Syria and how his erratic, impulsive decisions endanger our troops and make us all less safe.”

This afternoon, I'll be discussing Donald Trump's recent actions in Syria and how his erratic, impulsive decisions endanger our troops and make us all less safe. Tune in at 5PM ET to watch live: https://t.co/6hXwCuCLsr

Democrats like Kamala Harris, Psaki and even Joe Biden himself are not capable of any rational defence or providing any argument. No wonder, Democrats outside the Biden administration are finding it tough to defend the Syria strike. And they have even started speaking against it, in what could be the first sign of a major divide amongst the Democrats.