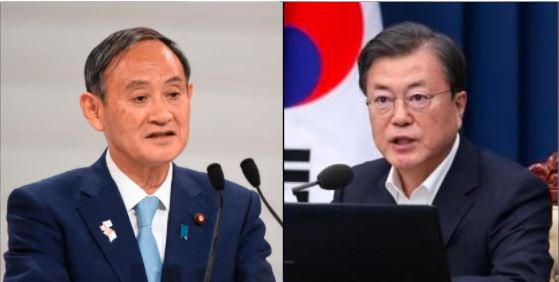 History is repeating itself in East Asia. It was the aggressive communist posturing by Mao’s China and the USSR that made Japan and South Korea forget their historical disagreements and join forces together with the USA to contain the Communist push. Now, as China’s belligerence has once again increased in the East China Sea and the Sea of Japan, Seoul and Tokyo are contemplating creating a military alliance.

Although the signals were amply available. Be it the recent spotting of the Chinese destroyer near Japanese waters, intimidation of Taiwan, but, the Alaska summit was the real watershed moment. Till then these countries believed in the alliance system of the USA, however, given the aggressive tone of the Chinese Communist Party, South Korea and Japan are finding it more reasonable to join forces and keep their differences on the back burner.

As the two US allies work to boost regional security against threats such as those posed by North Korea, South Korea’s defence minister hinted that the country may improve military cooperation with Japan. Suh Wook, who met with US Secretary of State Antony Blinken and Defence Secretary Lloyd Austin on their first foreign trip since taking office last week, said that Seoul sees Japan as one of its most important security partners and wants to continue cooperating with the US.

“What is protecting the Korean Peninsula is centred around the Korea-U.S. alliance, but we believe the Korea-Japan security cooperation is also a valuable asset, which is why we need to maintain this,” Suh said in a Bloomberg Television interview, a day after finishing talks with the US envoys.

The situation has been deteriorating since the CCP allowed its coast guard to shoot any vassal that enters the Chinese perceived territories. Recently, the Japanese defence ministry said on Friday that the Chinese Navy’s Renhai-class missile destroyer, together with another missile destroyer and a frigate vessel, sailed through Tsushima Strait from Thursday to Friday.

The ministry said that the crews on Japan’s Maritime Self-Defence Force vessels witnessed the Chinese fleet pass through the strait between Kyushu and the Korean Peninsula into the Sea of Japan. In addition to this, the situation with Taiwan is also deteriorating.

The ever-present threat of a Chinese attempt to take over the island has become more pronounced. In a recent statement, Chinese Premier Li Keqiang repeated the age-old stale threat to focus on the “reunification” of China as the ultimate goal. The Premier was speaking at the opening of the annual meeting of the Chinese parliament.

In such a situation, a clear stand by Japan that in case of any Chinese adventurism vis a vis Taiwan, Tokyo will provide a full-on military as well as all other kinds of support to Taiwan goes a long way.

The Alaska summit between China and the USA was an eye-opener for South Korea and Japan. It proved that China will no longer not be intimidated by the USA and these countries would need to take the front seat and increase cooperation among themselves and the USA to create a solid front against China.

The visits to Tokyo and Seoul by Blinken and Austin appeared to help defrost chilly relations between the neighbours, who host the bulk of American troops in the region. Seoul will continue to expand its partnership with the new Biden administration, according to the defence ministry, allowing it to play a larger security role on the international stage.

‘There is an unannounced ban on journalists under Biden,’ Getty Photojournalist presents the real picture from America’s southern border