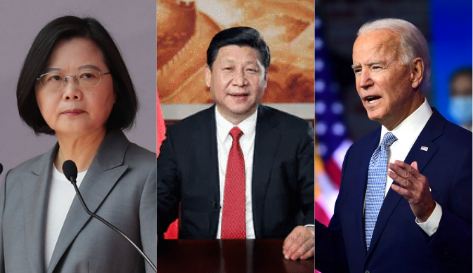 In the midst of the struggle and power play of East Asia lies the question of Taiwan. And being just a few nautical miles away from mainland China, it faces an imminent threat of possible Chinese military takeover. This is why the Taiwanese government has to continuously calibrate itself according to the changing dynamics of international politics.

As recent as last month, Taiwan’s government announced several personnel changes in leadership positions in its defence and security team, including the key posts of defence minister and National Security Bureau director. The fact that these were announced just after the Chinese New Year break, give fuel to the hypothesis that certain recent developments have prompted a shift in the island’s strategic thinking.

Although the previous calculation was based on the fact that, while China was increasing its aggressive posturing, Taiwan was still content with the uninterrupted support of the USA and Donald Trump. But, to some in Taiwan, the election of Joe Biden and his early China-friendly foreign policy has raised concerns that Washington won’t be as staunch in his support of Taipei. And, as a result, the country has brought multiple changes in leadership positions.

The thought of a free Taiwan which in its own right, is a sovereign state, a diverse society, a thriving democracy, a strong economy and most importantly wants to be independent, hurts the Chinese Communist Party to the core. This feeling has long existed in the mind of the Chinese government ever since after the civil war and the establishment of the Republic of China in the year 1949. Given the fact that China’s defence budget has crossed $200 billion, Taiwan’s dreams of independence seem distant again.

In a recent statement, Chinese Premier Li Keqiang repeated the age-old stale threat to focus on the “reunification” of China as the ultimate goal. The Premier was speaking at the opening of the annual meeting of China’s parliament.

Read more:‘Any country that considers Taiwan a free nation will be dealt with’, China issues a threat to the whole world

The arrival of Joe Biden in the White House has made these statements even more pronounced and has led to the cabinet overhaul. As per recent articles, the selection of Chiu Kuo-cheng as the new defence minister represents an anomaly. Prior to assuming this role, Chiu was serving as the director of the National Security Bureau. Given the breadth of his expertise and contacts in the intelligence community, local analysts assume Chiu will set a new precedent for the role of defence minister by concomitantly managing defence affairs and coordinating with NSB sources to exercise direct oversight of the Military Intelligence Bureau.

An ASSPI article sheds the light on the situation as it states, China’s ‘unrestricted warfare’ model has confounded the conventional dichotomy between kinetic and information warfare. And if the grey-zone activity, rather than outright invasion, is China’s preferred approach to achieving ‘reunification’, Taiwan’s defence strategies, and not only its tactics, will need to be more immediately responsive to up-to-the-minute intelligence and analyses. Put it another way, the defence of the island perhaps no longer entails simply determining the when and where of an invasion, but requires an evolving and dynamic understanding of what counts as warfare, and how it may be prosecuted.

Unlike Trump, Biden has avoided speaking specifically about Taiwan publicly, fearing backlash from the CCP regime, which the 78-year-old is working overtime to placate. And this has further heightened the concerns of Taiwan regarding the Island’s security and the maintenance of its sovereignty. These major cabinet reshuffles in Taiwan are a response to China’s threats and America’s indifference.