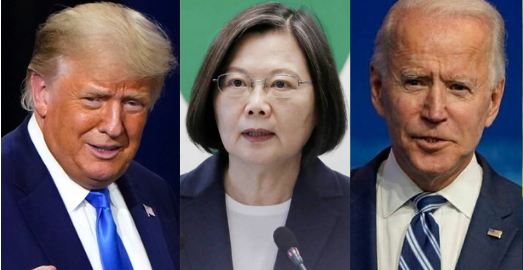 Exactly a month after Joe Biden was inaugurated as the 46th President of the United States of America – the Taiwan issue is back to haunt the oldest President ever to take charge of the White House. Unlike Trump, Biden has avoided speaking specifically about Taiwan publically, fearing backlash from China, whose CCP regime the 78-year-old is working overtime to placate. Although Biden was having a joyride at the White House until now, the latest developments show that he might be in for quite a storm, which threatens to put the man in an incredibly tough spot.

And who do you think is working to put Biden in the said tough spot? None other than former President Donald Trump. In line with the same, two brave Republicans – Senator Rick Scott and Representative Guy Reschenthaler, on Thursday, reintroduced the ‘Taiwan Invasion Prevention Act’ in the US Congress. The same draft legislation was also introduced in Congress in September last year but failed to make much headway.

With a new administration at the helm of affairs, Trump and the Republicans are preparing the ground for the very first geostrategic test of Joe Biden. The Taiwan Invasion Prevention Act, if passed by Congress and signed by the President, would be a historic and pathbreaking legislation – as it would take the US very close to recognising Taiwan as an independent and democratic nation. Further, the Act would also mandate that the US step in militarily to help Taiwan in the event of China launching an invasion against it.

For the uninitiated, China considers Taiwan as another estranged province of the mainland, which must be ‘unified’ at all costs, using force if necessary. The Act would empower and strengthen Taiwan by calling for a free trade agreement (FTA), increasing security cooperation with the US, and authorising the President to use military force to defend Taiwan against a direct attack. It would demand China to renounce the use or threat of military force in attempts to unify Taiwan.

The bill also seeks to help Taiwan counter China’s military build-up across the Taiwan Strait and establish limited authorisation for the US President to use military force for the specific purpose of securing and protecting Taiwan against an armed attack. In addition, the bill requires planning for coordinated military action in case of an attack on Taiwan by China.

Read more: With a belligerent China and an indifferent US President, Taiwan is in danger and the democratic world must protect it

The legislation also advises Taiwan to dedicate additional domestic resources towards its own defence, including the acquisition of asymmetric defensive weapons, reform of Taiwan’s reserve system, and engagement with the US on cyber defence activities.

It is no secret that a second term for President Donald Trump would have led to Taiwan being formally recognised as a sovereign and free nation. However, the coming of Joe Biden played spoilsport, which is why Trump is now, in all likelihood, pushing for the Taiwan Invasion Prevention Act to be floated in Congress once again.

Since Biden has maintained a safe distance from the Taiwan issue, the reintroduction of the explosive draft legislation will force Democrats to either support or oppose it. Needless to say, behind the Democrats’ decision will be the opinion of Joe Biden – who would advise the party to either let the bill pass or would direct them to stop it from reaching the Oval Office at all costs.

Donald Trump and the Republicans have got the Biden administration by its throat. Joe Biden can no longer pussyfoot around the contentious issue and must address it with authority. If he decides to support the legislation, which mandates US military aid to Taiwan in the event of a Chinese invasion of the island nation, he would risk losing the friendship of Beijing.

In fact, Biden would no less than make an enemy out of Xi Jinping, who in any case has a gun to the US President’s head in the form of a domestic probe into the Chinese dealings of Hunter Biden.

Supporting the bill would mean the Democrats must allow the bill to sail through the Congress, following which Biden must sign it to turn it into an Act, which the United States will then be compelled to follow irrespective of which party holds the keys to the White House.

However, there is also a fair chance of the Democrats being told by Joe Biden to not allow the legislation to pass, and oppose it tooth and nail in Congress. Even if Democrats do let it pass, Biden could always refuse to sign the bill. This would bring domestic shame for the 46th President of the United States.

Within the US, there is a palpable sense of solidarity that exists for Taiwan. Further, Biden’s claims of standing “rock-solidly” behind allies like Taiwan would also be reduced to dust, if he blocks the said bill from being turned into an Act.

And staying mum is definitely not an option as it would clearly suggest that Biden prefers the status quo which is akin to supporting China. Biden is likely to stay mum over the Taiwan issue, thus making the moniker China Joe appear reasonable to most Americans.

By playing the Taiwan card, Trump and the Republicans have ensured that Biden has nowhere to hide. And facing the gamble does not end well for Biden either.