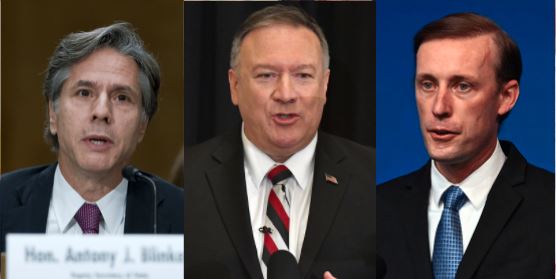 Former Secretary of State Mike Pompeo has made an interesting observation with regards to the latest Sino-US talks at Alaska, in which the Chinese Communist Party officials thrashed the living daylights out of the Biden administration, where top Chinese officials like Wang Yi and Yang Jiechi were present. Such was the embarrassment caused to Secretary of State Antony Blinken and National Security Adviser Jake Sullivan, that their embarrassment became manifest in their meek body language and absolute submission before China. No matter how the Democrats look to sugar-coat the events that unfolded at Anchorage, Alaska – the world community has received the message lock, stock and barrel.

While speaking to Fox News’ Sean Hannity recently, Former Secretary of State Mike Pompeo made an observation that everyone seems to have missed. He remarked how the Chinese officials had subtly referred to the anarchical Black Lives Matter protests of last year – which saw largescale vandalism across the United States. It is a well-established fact that the Democrats wholeheartedly put all their weight behind such ‘protests,’ and as such, the Biden administration was immediately taken aback by Chinese remarks over Americans not having trust in the democratic system of the United States itself.

BLM is a touchy subject for the Biden administration. Scenes that unfolded last year showed that in face of anarchy, the United States and ordinary Americans can be taken for a ride, even as helpless administrative machinery watches on meekly. So, when Yang Jiechi, used phrases like, “We believe that it is important for the United States to change its own image and to stop advancing its own democracy in the rest of the world…Many people within the United States actually have little confidence in the democracy of the United States,” Biden’s foot soldiers were taken by surprise.

China also raised the issue of America’s own human rights track record, further cornering Blinken and Sullivan. The Democrats have been defending BLM for the longest time possible, referring to it as an organic movement stemming from the alleged ‘systemic racism’ prevalent in the USA. As such, when China turned the movement into a ‘fight for democracy,’ the Biden administration fell short of words, as was clearly visible.

Mike Pompeo warned Americans that the Chinese had begun perceiving weakness on the US’ part and that once they do so, they will bully America. And they did, as Blinken and Sullivan were humiliated at Alaska, even while Joe Biden continues to be ‘proud’ of them for their alleged tough talk with China.

Adding that if this issue is not addressed, the United States is in for “an awful lot of trouble,” Pompeo said, “Weakness begets war. Weakness begets hostility.” He also said that the Chinese have come to believe that the Biden administration will be weak on China, which is why they have resorted to flexing muscles while sitting on American soil.

The BLM protests, according to Pompeo, openly backed by the Democrats, have made the Chinese believe that American democracy is most certainly in decline, which is why they are now lecturing the Biden administration on human rights abuses in the United States. To be clear, China would have never dared do so much as raise its voice when talking to the Trump administration, particularly with a China hawk of Mike Pompeo’s stature. Pompeo would have put the CCP officials in their place from the word go.

In June 2020, Pompeo is said to have blasted Chinese Communists in Hawaii, after which bilateral ties between the two countries nosedived. So what if relations between the two countries froze? America does not need China, although the same cannot be said for the paper dragon. It is solely due to the Biden administration and its support for anarchism that the United States of America got humiliated, scolded and taunted by China – which is a Communist dictatorship itself.