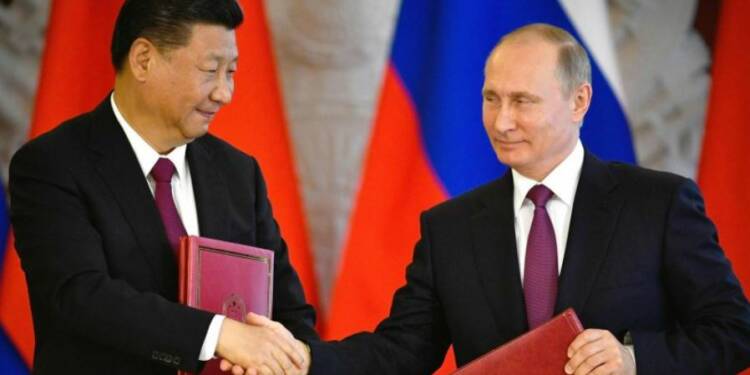 China likes to propagate the thought that Russia and itself have their geopolitical and international interests aligned, thus necessitating a ‘strategic axis of convenience’ between the two countries. Russia too, facing American sanctions and an eternally Moscow-obsessed NATO, is forced to play along and pretend to be having warm relations with China. Yet, the realities are starkly different, and have begun becoming manifest in the form of joint efforts between Moscow and Beijing for building high-tech and strategic items moving ahead at a snail’s pace. In the said ‘partnership’, Moscow is the supplier of natural resources and defence equipment.

But these partnerships have failed and the answer lies in a 2018 speech by Putin. “Moscow is not yet prepared to sell its very latest weapons,” Vladimir Putin told Russian parliamentarians. In fact, Russian experts believe that if Russia wants to maintain a dominating share in China’s defence imports, then it must engage China in the joint development of weapons but not give too much benefit to China in the process also.

According to a recent paper published by the Moscow Center of Carnegie, China plans to, in the next five years, become self-sufficient by doubling its GDP by 2035 and achieving the status of a high-income economy. This is no good news for Russia, which is currently dependent on Chinese markets for keeping its sanctions-ridden economy afloat. So, in order to prevent China from becoming self-dependent and also to ensure that Russian interests are not hampered in the process, Vladimir Putin is executing a complex gamble-filled strategy.

The idea is to push prolonged joint defence research projects to jack up military exports to China, while also minimizing the transfer of crucial military tech and the export of flagship entirely Russian-developed arms and equipment. This is because Russia does not trust China, for China is infamous for ripping off Russian defence products and reducing Russian imports, but Russia is also interested in maintaining a steady arms export relationship with China, as it is economically desirable.

If China achieves its goals of self-dependency in all spheres, the middle kingdom would not need Russia and would also gain an upper hand in the region. So, Putin is favouring only joint partnerships with China, which ensure that the paper dragon maintains a constant stream of imports from Russia, thus benefitting the Russian economy. Joint partnerships also force China to invest in Russia – not just in the technology being jointly developed, but also in other sectors.

Russia wants this to continue for the sake of its economy. What Russia does not want is for China to gain the upper hand in critical sectors, particularly defence, by milking its ties to Moscow. It is no secret that China is an intellectual property thief. China has been using Russian IP in order to proliferate its own defence sector, and selling the end-products to varying entities as a result. This has been hurting both – Russia’s fortunes as well as its global image.

Apart from being a lucrative market, China is nothing to Russia. So, when the paper dragon envisions self-dependency for itself in the near future, Putin must do all that he can to ensure that such plans of the Chinese fail, and that the Russian economy keeps benefitting by Beijing’s dependence on Moscow.

At the core of the failure of Sino-Russian partnership from achieving what it initially wished to lies the trust deficit between the two countries. Russia, particularly, does not trust China with its high-end technology, particularly pertaining to the defence sector. So, selling its weapons without ensuring the permanence of the Chinese market for itself over a long period of time is a non-starter. Therefore, Russia is moving at a snail’s-pace when it comes to the joint partnership between the two countries for building high-tech and strategic items.

Read more: China is playing too dangerously by trying to eat into Russia’s arms selling business, something Putin won’t approve

In essence, Russia’s strategy involves entering into high-value partnerships with China, while also ensuring that they do not turn into successful ventures immediately, and are stretched over a long period of time. In December 2020,  Russian President Vladimir Putin had signed into law a bill which paved the way for any politically active, foreign-funded individual or organisation to be labelled a “foreign agent.” All that the law signed requires for a foreign-funded individual to be designated as a foreign agent is that such person gathers information on Russian military or military-technical activities. The biggest target of the said law is China.

In order to give you a sense of how brazenly China steals Russian defence technology to use the same for domestic production and then for global exportation, here’s what Yevgeny Livadny, Rostec’s chief of intellectual property projects, had said, “Unauthorized copying of our equipment abroad is a huge problem. There have been 500 such cases over the past 17 years. China alone has copied aircraft engines, Sukhoi planes, deck jets, air defense systems, portable air defense missiles, and analogues of the Pantsir medium-range surface-to-air systems.” Rostec is Russia’s state-owned defence conglomerate.

Vladimir Putin has close to no trust in Xi Jinping, and is engaging with China only in order to prevent relations between the two countries from nosediving. China’s expansionism from Central Asia to the Arctic, to the Russian Far East and Vladivostok, and also against India – a true friend of Moscow, has not augured well with Vladimir Putin. Russia is, therefore, skilfully delaying joint partnerships with China, and ensuring that Moscow milks away all that it can at the cost of the Chinese.