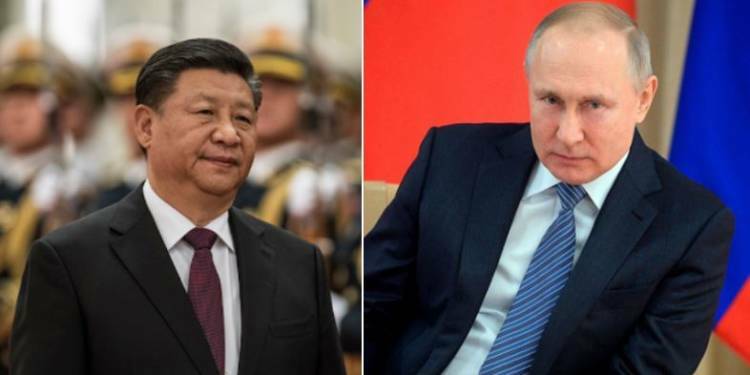 China has for a long time tried to make Russia the junior partner in what the Chinese Communist Party calls a strategic alliance. And in line with this, China is dangerously trying to eat into Russia’s arms selling business. It is trying to overtake its ally in the business that Russia has an undeniable mastery. However, those who have even the minutest understanding of world affairs know that Russian President Vladimir Putin would not approve any such misadventure at the hands of Beijing.

In a flashy recruitment video released by China’s People’s Liberation Army Air Force last week, four J-20 fighters are seen soaring through stormy skies, deftly maneuvering between lightning strikes. By means of this, China wanted to showcase that for the first time ever, the Chinese jets will be powered by domestically made engines instead of Russian ones. Beijing is setting up the groundwork for portraying its arms and ammunitions as an alternative option for interested nations to take cognizance of.

As per Asia Nikkei report, Beijing’s decision to replace the J-20 engines, is just the latest sign that China is rapidly closing the military gap with its northern neighbor. For decades, China leaned heavily on Russian weapons to modernize its armed forces. But, as per the Chinese media that has begun to change, as China builds its own powerful defense industry and even starts to challenge Moscow in the global arms market.

While China has been slowly copying the Russian technology both legally and illegally, it is now trying to eat into the Russian weapons business. The Chinese arsenal most notably J-11 fighter jets and HQ-9 surface-to-air-missiles, which appear almost exactly identical to earlier variants bought from Russia. In December 2019, Rostec publicly accused China of illegally copying a broad spectrum of Russian military technologies over the course of nearly two decades.

Putin is not taking this lightly and in response to the same, the Russian President had signed into law a bill which allows any politically active, foreign-funded individual or organisation to be labelled a “foreign agent.” All that the law signed requires for a foreign-funded individual to be designated as a foreign agent is that such person gathers information on Russian military or military-technical activities. This is quite overtly telling China that they should watch their actions and not think there will not be consequences.

Read more: Putin is all set to make Xi regret sending China-backed spies to Russia and stealing its military secrets.

China has very substantially increased its arms production which has been bolstered by a rapid increase in military spending. According to SIPRI, China’s defense budget expanded by 85% over the past decade, reaching $261 billion in 2019. China’s rise as a weapon exporter has been carried forward its stealing Russian technology. Yevgeny Livadny, Rostec’s chief of intellectual property projects, had said, “Unauthorized copying of our equipment abroad is a huge problem. There have been 500 such cases over the past 17 years. China alone has copied aircraft engines, Sukhoi planes, deck jets, air defense systems, portable air defense missiles, and analogues of the Pantsir medium-range surface-to-air systems.”

Yet, Putin is no longer willing let Chinese overbearing go on as usual. The Sino-Russian relationship has been getting irreparably strained. Xi’s China has been staking claim over parts of the Russian Far East region. Putin has been showing China a mirror time and again, and China may want to be a bigger weapon power but Moscow has shown time and again who is the boss.