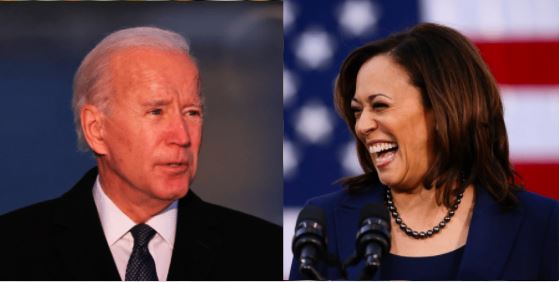 Illegal immigrants are literally being caged. The southern border of the United States faces a crisis not known to the country in recent history. The Biden administration remains adamant to not term the unprecedented surge of immigrants on the border as a ‘crisis’. In order to stop itself from being exposed for the totalitarian regime that it is, the Biden administration has also prohibited the media from accessing the crisis-struck borders. Amidst all the chaos the United States is facing, Vice President Kamala Harris, when asked a valid question seeking to know whether she would be visiting the crisis-struck border, laughed out loud.

That’s right! Kamala Harris thought it best to laugh her gut out when probed about the ongoing border crisis. While taking questions from reporters outside of Air Force One, Harris was asked if she had “plans to visit” the southern border. The Vice President responded to the query with a “not today” before laughing. She continued on to say that she had visited “before” and that she would probably go back. The Vice President’s rather hearty laugh has shocked American patriots, who are unable to fathom how the second most powerful person in the Biden administration considers the ongoing national security threat a joke.

Apparently, the border crisis is now a laughing matter for the Biden administration.

WATCH: VP Kamala Harris laughs when asked if she has any plans to visit the border. pic.twitter.com/z3AdoFX0Dq

However, behind that laugh is inherent happiness, which Kamala Harris just cannot conceal. It is no secret that the reins of power lie with the Vice President, and Joe Biden is merely a showpiece installed in the Oval Office by the Democrats. A 2024 presidential run for the man, who will be 82-years-old four years down the line, is extremely unlikely. As such, his natural successor, and an already projected Democrat nominee will be VP Kamala Harris. Harris laughing upon the mere mention of the southern border is quite indicative of how she is quite openly enjoying the ruination of America.

Not only is she mocking the country for the crisis that it faces, but is also exuding confidence in how Joe Biden is being undermined as President with each passing day. Growing discontent against the leadership of President Biden will work wonders for Kamala Harris three years from now when America will once again vote for choosing a President. If Biden’s first two months in office are anything to go by, the Americans will despise the man from the core of their hearts by 2024, leading to them searching for desperate alternatives. Among the Democrat voter base, what would the alternative be? Most definitely, it would be Kamala Harris.

To that end, Harris is already taking a lot of initiatives. Nobody can become the President of the United States of America without a good hold over the country’s foreign relations. So, as reported by TFI earlier, Kamala Harris is taking crash courses in diplomacy to address her deficiencies on that front. She has also been dialling leaders across the world on her own accord and is also receiving daily intelligence briefings alongside Joe Biden.

Effectively, she is being readied by the Democrats to take forward the mantle of authoritarianism from Joe Biden come 2024. The fact that she would have to face off a formidable Republican candidate, who could very well be Donald Trump himself, is a subject that can be talked about some other day.

The more pressing issue here is that Kamala Harris is making no secret of the fact that she is overjoyed by the Biden administration’s failure to control the crisis on the country’s southern borders. TFI had also explained earlier how every ‘victory’ of the present administration would be projected as the doing of Kamala Harris alone, while all the negative bits would be piled upon the already frail Joe Biden. Make no mistake, as Vice President, Kamala Harris should have been burning the midnight oil to solve the border crisis. Instead, she is laughing about it – showing just how happy she is witnessing the helplessness of her boss.

When the presidency is being served to Harris on a platter, she will most certainly not be humane enough to help Biden during his tough days in office. Instead, she is content watching from the galleries as the Biden administration makes a fool out of itself, thus paving her own path into the Oval Office.

So what if CCP had the gall to thrash the USA in Alaska? At least Wall Street is having a great time in China