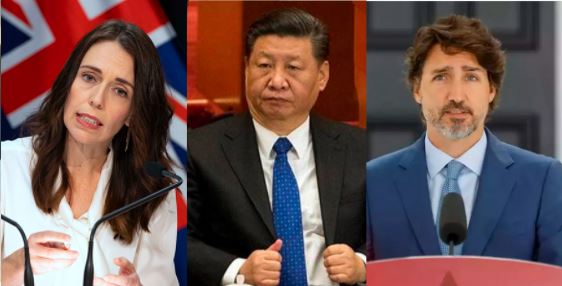 New Zealand and Canada are the two countries that epitomise all that is wrong with the Free world in its strategy towards China. It is because the leaders of these countries compromised the united front against China. One example is the Five Eyes, an intelligence-sharing alliance comprising Australia, the UK, the US, Canada and New Zealand, which stood paralysed because Canada and New Zealand’s leaderships have been compromised to China.

However, now as the other members of the Five Eyes alliance along with the European Union have taken a tough stance on China’s human rights abuses, New Zealand and Canada too have been forced to act however reluctantly. While Canada joined the United States, the European Union (EU) and Britain and imposed sanctions on Chinese officials on Monday for human rights abuses in Xinjiang. New Zealand, meanwhile, has supported these sanctions while shying away from imposing its own set of sanctions.

Just after the western nations came up with the sanctions, Australia and New Zealand following the lead, raised “grave concerns” about human rights abuses against Muslim minorities in China’s Xinjiang region, citing “the growing number of credible reports” of severe violations.

It is a well-known fact that Australia has criticised China whenever it found the opportunity to do so. However, New Zealand in the near past has practised a very overt display of appeasing the Chinese Communist Party. So when it signed a joint statement against China on the matter of Uighurs, it came as a surprise.

With their recent actions, Justin Trudeau and Jacinda Ardern are pushing the Five Eyes alliance in the ditch. What used to be the world’s most powerful intelligence-gathering body- the Five Eyes group has become compromised and turned into a toothless tiger. But pressure from the free world seems to have made both Jacinda and Trudeau weak and they are reluctantly watching their nations follow an anti-China line.

Trudeau’s Canada and Jacinda Ardern’s New Zealand have been failing the loyalty test when it came to the Five Eyes. It was visible when in Canada, the pro-China lobby reinvigorated efforts to get Chinese tech major Huawei’s CFO Meng Wanzhou released as well as when Trudeau tried to conduct joint military drills with Beijing. And in the case of New Zealand, it has been taking pro-China measures for quite a while, even going to the extent of intimidating its neighbour Australia at Beijing’s behest.

Read  more: Trudeau and Ardern: The two insiders who are openly compromising the Five Eyes group at the behest of China

Justin Trudeau is dragging the alliance back and surprisingly against the will of fellow Canadians. A recent survey conducted in Canada has shown that a whopping 52% of Canadians see China as the biggest security threat faced by the nation. The survey can be seen as a result of the eternal lasting trade wars and China kidnapping two high profile Canadian citizens, Michael Spavor and Michael Kovrig. Even with such public support, Justin Trudeau found it more reasonable to abstain from the Canadian parliamentary vote on China’s human rights abuses.

Read more: 52% of Canadians are against China, but Justin Trudeau is still spineless. What is he hiding?

New Zealand too has showcased its inclination towards Beijing earlier on multiple occasions. In January, as Australian, US, British and Canadian Ministers of Foreign Affairs made a joint statement expressing “serious concerns” over the detention of 55 Democracy activists and supporters in Hong Kong, New Zealand’s Jacinda Ardern kept away from the statement.

The Five Eyes is supposed to lead the free world’s fight against the Communist-authoritarian giant – China. But how Canada and New Zealand have been acting and repeatedly compromising the ability of the organisation in containing China needs to be taken seriously.

Taking a stand against the Chinese Communist Party has never been a priority for Canada and New Zealand, and if they have done it this time, it is just because of the pressure from the free world.

Going ahead, the member states should realise the burden they are carrying by keeping New Zealand and Canada in such a prominent position. Moreover, the USA, UK, and Australia should formulate another organisation, be it within the Quad architecture or otherwise. This will create an intelligence-sharing alliance that is safe from countries like Canada and New Zealand compromising any action against Beijing.