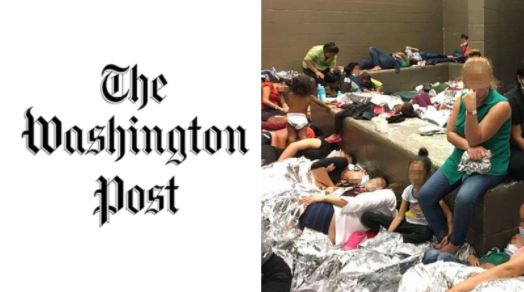 US Main Stream Media has been a spectacle; they can stoop to any levels to appease their Democrat overlords. Although the leftist media was covering too little about the migration catastrophe on the southern borders to seem unbiased, the left ecosystem is still angry. Washington Post has risen to the occasion to show all the leftist media houses a mirror and tell them that they should not cover the border crisis at all, as by doing so, they are compromising their loyalties.

The WaPo rant started with stating that, “A flood. A wave. A surge. What’s happening at the U.S.-Mexico border is none of those things, but you wouldn’t know it from watching or reading some of the coverage in U.S. media.” The rant has wholeheartedly denied any bad thing which is happening on the Mexico Border. It wants everyone not to believe the videos of children in cells and is suggesting the media to not report actual stuff so that people do not criticise the Biden administration.

Earlier, the Biden administration was gagging the media from doing negative reportage, but now the WaPo is echoing the frustration of the Democrat government and has, in a way, become the spokesperson.

“Our entire administration will always be honest and transparent with the good news and the bad. We’ll level with you when we make a mistake. We’ll straight up say what happened.” These words, do they ring a bell? They most definitely should, because these are the words of President Joe Biden one day after being sworn into that role.

According to award-winning Getty photojournalist John Moore, there is a complete lack of transparency along the border. Taking to Twitter, Moore said, “I respectfully ask US Customs and Border Protection to stop blocking media access to their border operations…I have photographed CBP under Bush, Obama and Trump but now – zero access is granted to media. These long lens images are taken from the Mexican side.” It is perhaps for the very first time that a journalist has had to cross over into Mexico to capture images of the happenings on the U.S.’ southern border, a glowing testament of how Mexico is a freer venue for the media than the United States under Joe Biden.

Read more: ‘There is an unannounced ban on journalists under Biden,’ Getty Photojournalist presents the real picture from America’s southern border

One should just marvel at the fact that how much a person and a publication can bend to make the establishment happy. WaPo went ahead and bashed the leftist media for not being loyal enough. The article said, “In recent weeks, the phrases “surge of migrants,” “migrant surge,” “the surge,” “surge at the border” and other variations have all appeared in articles in the Wall Street Journal, NPR, CBS News, ABC News, NBC News, the Associated Press, the New York Times, CNN, Reuters, the Los Angeles Times and yes, even The Washington Post. The descriptions are not just factually inaccurate and divorced from important context but also closely linked to images of war and natural disasters.”

All these statements are being made at a time when the southern states, as well as the countries down south, experience the negative impact of the careless leadership that Joe Biden is pursuing. This goes on to show further how dictatorial the Democrats are and which direction they are taking the USA in.