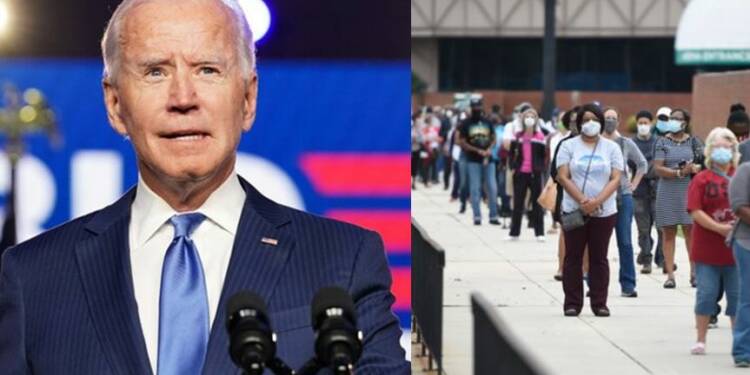 The state of Georgia, which turned Blue for a Democrat Presidential nominee for the first-time last year after 1992 is now reforming its electoral and franchise-related processes. President Joe Biden surprised everyone when he bagged the state of Georgia for himself, sparking speculations of some discrepancies having crawled into the state’s electoral and voting system. The government of Georgia has not been averse to the idea of reforming elections in the historically pro-GOP state. So, on Thursday, The Election Integrity Act of 2021 passed in both chambers of the state’s Republican-controlled legislature. Georgia now becomes the second state after Iowa to pass some voting reforms.

President Joe Biden criticised the new voting law in the state of Georgia, in a statement on Friday, and compared it to the Jim Crow laws, put in place in the 19th century to legalise racial segregation and disenfranchise Black citizens in America’s South. In a statement, Biden said, “Recount after recount and court case after court case upheld the integrity and outcome of a clearly free, fair, and secure democratic process…This law, like so many others being pursued by Republicans in statehouses across the country is a blatant attack on the Constitution and good conscience.

“This is Jim Crow in the 21st century. It must end. We have a moral and constitutional obligation to act,” he went on.

The President falsely insinuated that the new Georgia law would deny people of colour their right to vote. In what can also be termed as a brazen case of federal overreach, Biden also informed that the justice department was “taking a look” at the new Georgia laws. As a matter of fact, Democrats are rattled by the new laws in Georgia and Iowa, since their hegemony over the voting process has begun being challenged. A closer look at the law passed by Georgia would have no sane person outraging their lungs out over it. Yet, desperate Democrats, who American patriots have thumpingly rejected, are shaking in their boots.

The latest reforms in Georgia will go a long way in ensuring free, fair and secure elections in the future. The law gives the state election board powers to take control of the election offices in 159 counties of the state if any anomalies, technical glitches or discrepancies are reported, while also imposing ID requirements for absentee ballots, replacing the current system that required only signatures. Yes, you heard that right. Only signatures!

The law also bans the practice of giving food or water to voters in line at polling stations. According to the latest reforms in Georgia, the number of “drop boxes” in which people can place their absentee votes has also been limited. The new law also shortens the time for runoffs in the state from nine weeks to four weeks, thus reducing the span of runoffs in Georgia. Needless to say, these are progressive reforms at streamlining the voting process in the state. Yet, Democrats are up in arms against the state of Georgia for daring to reform its electoral process.

Biden’s anger was evident about another decision as well. “If you want any indication that it has nothing to do with fairness, nothing to do with decency, they passed a law saying you can’t provide water to people standing in line while they’re waiting to vote?” Biden said. “You don’t need anything else to know that this is nothing but punitive, designed to keep people from voting. You can’t provide water for people about to vote. Give me a break.”

The main contention of Democrats is that they believe people of colour, who form a major voter base for the blue party, will somehow be deprived of their voting rights. How prohibiting the distribution of food and water near polling stations is a deprivation of voting rights for mainly Blacks is not yet understood by anyone but the Democrats. The sole point of contention for the Dems is that mail-in voting using absentee ballots will now require voters to furnish their identity proof, as opposed to the earlier norm of simply providing one’s signature.

Read more: Democrats want Voter IDs to go because they are “Racist”

It is not particularly surprising that Democrats are frightened by the prospect of people without any IDs not being given the right to vote via absentee ballots. While that speaks a lot about the voter base of Democrats, it is also an indicator of how the Dems have generalised all people of colour as people who do not have proper IDs. By outraging over the said reforms, Joe Biden too is normalising a largely-held stereotype in the United States against Blacks.

What the reforms passed by Georgia do is make the voting process more efficient, streamlined and trustworthy. Yet, Democrats realise that with such positive steps being taken in to increase the efficiency of the electoral process, their fortunes are in jeopardy. Why that seems to be the case is something which only the Dems can speak about.

‘Let’s exploit the Suez Canal crisis’, As China promotes its BRI quietly, Russia comes up with its Arctic card