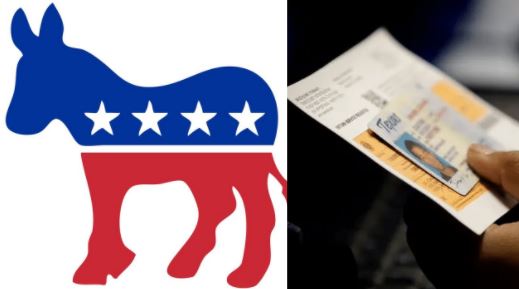 Democrats in the United States have stooped to a new low. New voting laws are to be presented and democrats will aim to push it through the Senate with or without bipartisan support. It was not very clear earlier as to why they would want to do that, but now, it has become very clear that the democrats have no idea why do they actually want the voter IDs to go.

Read More: US Court delivers a telling blow to Joe Biden by putting his immigration plan on the backseat

The surprising factor was when the same survey was broken down on party lines. 60% of Democrats support showing an ID to vote compared to 89% of Republicans.

The American Civil Liberties Union’s website says about its opposition to voter ID laws, “Many Americans do not have one of the forms of identification states acceptable for voting. These voters are disproportionately low-income, racial and ethnic minorities, the elderly and people with disabilities. Such voters more frequently have difficulty obtaining ID, because they cannot afford or cannot obtain the underlying documents that are a prerequisite to obtaining government-issued photo ID card.”

Former President Donald Trump had slammed the voter legislation earlier this week, saying through one of his advisers that Democrats are attempting to “rig” elections and “must be stopped.”

Republicans have long pressed for voter ID laws, arguing that they are an effective way to curb voter fraud. Democrats, on the other hand, argue that voter fraud is a “myth” and that voter ID laws discriminate against low-income and minority populations.

According to Rasmussen, black voters are evenly divided at 43 percent on whether or not being asked to provide identification is discriminatory.

Supporters of voter ID disagree, citing statistics that show no reduction in voter turnout in places where a photo ID is required to vote, as well as the suggestion that minorities have difficulty obtaining identification.

Republican Rep. Burgess Owens, a person of colour was speaking about the voter ID laws. He said, “You know what’s racist? Assuming because I’m black that I just don’t have the capability of getting an ID. Disclaimer: We are capable of getting an ID (and even using the internet!)”

The term Racist is now used very loosely in the US. The Democrats have used it to avoid questions and end debates. Now they are using it to push legislations. A document that has been issued without accrediting a person’s colour, race or gender is not racist. The voter ID card was not issued to people based on their colour, their race, their gender or their income. The Democrats it seems have finally lost it.