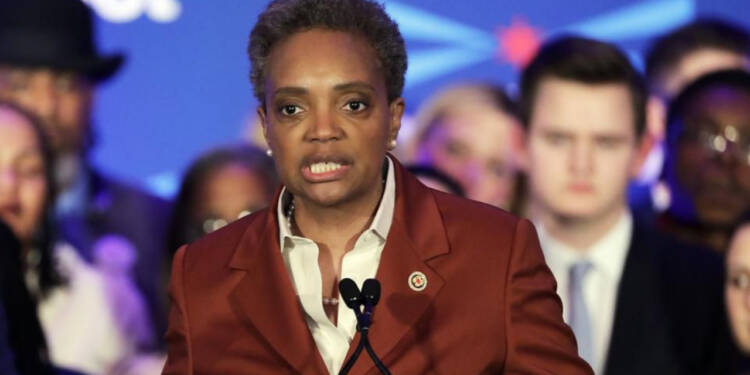 The term racist is now used very loosely in the US. If you disagree with someone, tell them that they are racists and boom, the argument is over. That’s what Chicago Mayor Lori Lightfoot did when two aldermen opposed an ordinance which would turn Chicago into a haven for criminals.

As the City Council voted to expand security for immigrants under the city’s sanctuary city rule, Mayor Lori Lightfoot blasted two aldermen for making “racist” and “xenophobic” remarks. Ald Anthony Napolitano (41st) and Ald Raymond Lopez (15th) were blasted by the Mayor, who both opposed modifications to the Welcoming City ordinance. She said, “Being an immigrant is not a crime, I just have to say, shame on you.”

She added, “Spirited debate, which is at the heart of our democracy, is not the same as using racist tropes and xenophobic rhetoric to promote yourself on the backs of others and demonize them, and we dare not be silent when that happens, particularly not when it’s coming from the mouths of City Council members.”

Alderman Napolitano, son of two immigrants and the only Republican, and Alderman Raymond Lopez, who represents immigrant communities, said that they did not approve of the amendments to the rule as it would make Chicago, a haven for convicts and felons, illegal immigrant or not.

Napolitano said, “By eliminating those exceptions we are essentially welcoming criminals to our city. If you are an illegal immigrant and a convicted felon, or a fugitive, what better place to go than Chicago.” He added, “This ordinance irresponsibly offers protections to those who have possibly broken the law to hide underneath this ordinance and gives them safe haven from federal prosecution.”

Raymond Lopez also defended his “no” vote. He said, “I opposed the changes, not because of racism and xenophobia, but because I too represent immigrant communities. The law threatens the safety of residents in the Southwest Side ward.”

“They have been sucked in by the generational violence that impacts so many of our communities,” he said. He also added that those individuals would be treated with the “same compassion” as law-abiding members.

The ordinance has removed four exceptions from Chicago’s Welcoming City Ordinance. The police can no longer turn over to federal immigration agents for undocumented immigrants who have criminal charges or convictions in their background or who are the subject of federal criminal warrants. The police also cannot cooperate with federal agents just because an arrested person’s name is in the city’s gang member database.

This means that the police are no longer allowed to co-operate with federal agents when an undocumented immigrant is a convict. Now that these rules have been removed, Chicago under its amended welcoming city rule will welcome all of America’s illegal immigrants who will also be supposedly criminals.

But as is the norm under Biden, plain old crime is not much of a crime anymore. The need of the time, according to the Biden administration, are gender issues, protecting ‘non-citizens’, and Biden-the messiah of the fringe groups. The new norm also is, thou shalt not criticise, or be labelled as racist, xenophobic, or very easily a white supremacist, as the recent arguments made by Lori Lightfoot suggest.

Dissent on soft issues to protect the American taxpayer is racist according to the Mayor of Chicago Lori Lightfoot and it’s xenophobic. And if questioned how just use the name “Trump”. I fail to understand, how is protecting, or speaking for the taxpayer racist? Is that not why the ‘taxpayers’ elect the representatives, to speak for them and put forth their interests?

But as previously stated, it’s a new norm and the start of a very slippery slope. The societal fabric will tear apart as the people for whom the government is, are being put aside for the interests of a few against the interests of many.