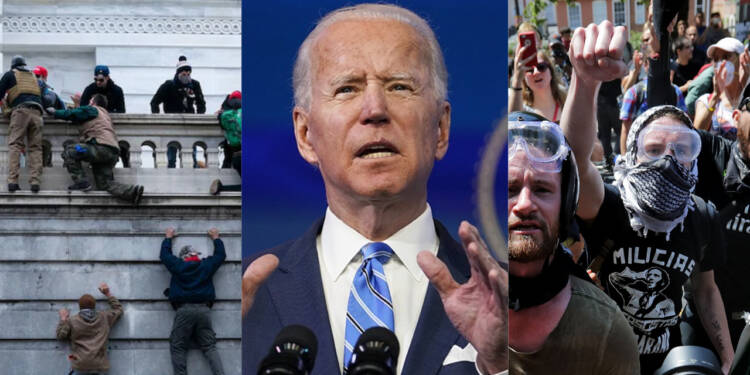 Joe Biden’s administration has announced an inter-agency review due to the rise of domestic extremism in the United States. But there’s a catch, only the Capitol Hill protests have been taken into purview.

After winning the elections, Biden had called for bipartisan support to heal the United States. He has been three days in the office and has already started to divide the Americans on political lines.

The riot at Capitol Hill, which briefly prevented the counting of votes for Electoral College, left five people dead and resulted in the second impeachment of Trump. Law enforcement authorities are under fire for their January 6 arrangements.

White House Press Secretary Jen Psaki talked to reporters at her daily news conference on Friday. She said that the Biden administration will confront this threat with the necessary resources and resolve it.

“The January 6 assault on the Capitol and the tragic deaths and destruction that occurred underscored what we have long known: The rise of domestic violent extremism is a serious and growing national security threat,” Psaki said.

“We are committed to developing policies and strategies based on facts, on objective and rigorous analysis, and on a respect for constitutionally protected free speech and political activities,” she added.

Interestingly, the mass riots that occurred during the BLM movement, which led to millions of dollars of destruction and the 25 lives, are not being scrutinised. Antifa protestors were burning American flags and rioting in the streets in Portland, Denver and Seattle during the day of Biden’s swearing-in ceremony. But no enquiries are being made into it and no statement has been made to address those.

For the Biden administration, the violent BLM demonstrations were a way of bringing in social reforms. But, the Trump supporters’ march on the Capitol Hill was considered a terrorist coup. For the entire left coterie, tossing the word ‘coup’ around quite foolishly and frivolously just portrays intellectual ineptness.

Congresswoman Cortez and the champion of left-liberals across America, AOC had remarked that the ‘whole point of protesting is to make people uncomfortable.’ And when the Trump supporters followed the exact blueprint was laid down by her. They became fascists and terrorists.

Suddenly, the liberal cabal that called the marches and demonstrations the cornerstone of noble, civilised society, was shell shocked. The Capitol protests were met with abuses from the whole left caravan and now the Biden administration is making sure that the right-wing is subdued.

The Antifa rioters attacked the Democrat office building in Portland. They were armed with knives and clubs. But under the Biden administration, they have been skipped from the inter-agency domestic extremism review. This surely reeks of a politically motivated policy.

What is even more surprising is the fact that in December, violence had broken out in the streets of Washington DC. Antifa collided with peaceful protestors from the Trump faction who were agitating against Joe Biden’s alleged election victory. Several pro-Trump protestors were stabbed and injured by the Antifa members but neither Joe Biden nor Kamala Harris came out of their homes to criticise the actions of the fascist group.

And the same holds even now. Biden has made it his will to skip or side-line the atrocities that the Far-left violent Antifa members committed. On the other hand, he seems instilled on the idea to make those pay who even stood in Trump’s support.

Biden calls himself the ‘Healer-in-Chief’. But the first few days of his office have ranged from violent protests and burning of American flags to now putting the whole blame for domestic extremism on Trump supporters doesn’t seem like an act of a healer, but that of a divider.

A bold China, a bolder Iran – How USA’s enemies for the last 4 years are rejoicing after Trump’s exit