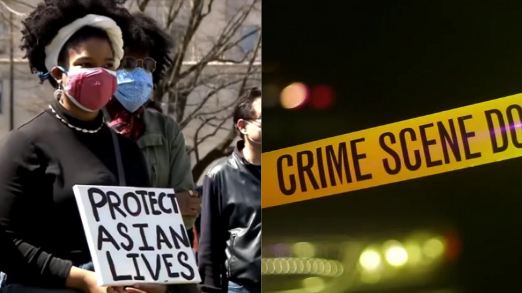 The general stereotype which prevails in the United States is that hot-headed White Supremacists are at the root cause of all crimes in the country, whether they be racial, sexual or even communal in nature. A passive citizenry intoxicated with the poisonous liberal ideology, whose minds are garnished with the ‘woke’ virulent, readily buy into such nonsensical theories and assertions. Any crime committed in America by Whites is considered to stem from their inherent hatred for persons of colour, while all crimes committed by coloured persons are given a free pass, or worse, even justified by many as the alleged consequence of years of systemic racism they were forced to face.

Crimes against Asian Americans have witnessed an unprecedented spike in the past year. The research released by reporting forum Stop AAPI Hate recently revealed nearly 3,800 such incidents were reported over the course of roughly a year during the pandemic. It’s a significantly higher number than last year’s count of about 2,600 hate incidents nationwide over the span of five months. Verbal harassment and shunning were the most common types of discrimination, making up 68.1 per cent for women and 20.5 per cent for men, according to the research. The third most common category, physical assault, made up 11.1 per cent of the total incidents. More than a third of such incidents occurred at businesses, the primary site for discrimination, while a quarter took place in public streets.

Of course, these are cumulative figures. However, the statistics released by the New York City police are rather shocking and deflate the ‘White Extremism’ bogey which liberal media and radical Democrats so enthusiastically like to raise at the drop of a hat. According to VOA News,  in New York City, where anti-Asian hate crime soared nearly nine-fold in 2020 over the year before, only two of the 20 people arrested last year in connection with these attacks were White, according to New York Police Department data analyzed by the Center for the Study of Hate and Extremism. Eleven were African Americans, six were White Hispanics and one was a Black Hispanic.

The report added, “most police departments do not publish this kind of data, but anecdotal evidence suggests the pattern seen in New York has emerged in other cities, as well.” This is to say that the trends being observed in New York are largely getting reflected in anti-Asian crime statistics across the country. As a matter of fact, a majority of all recent anti-Asian crimes, whose details and footages are going viral on social media platforms, show that the perpetrators are usually persons of colour.

This is not to suggest that entire communities are criminally targeting people of Asian background, although that is usually projected as the case when the perpetrators happen to be Whites, in which case their entire community is harassed and slandered for having ‘supremacist’, ‘exclusivist’ and ‘racial’ tendencies. Recent cases of anti-Asian hatred, however, have stirred a much-needed conversation in the United States – that of the fault lines between the African American, Latino and Asian American communities. Somehow, talking about these deep faults was considered unholy, although the recent spike in Asians being attacked by African Americans and Latinos/Hispanics has made people notice the palpable anti-Asian hatred which some people of these communities harbour.

Read More: Joe Biden claims to be with the Asian American community, but has done nothing to eradicate blatant racism in America’s top schools

Asian Americans have come to become the targets of racial and violent crimes because they are usually well to do and have established themselves as a community that works hard to lead a good and prosperous life. Hatred for Asians has grown particularly in the aftermath of the Covid-19 pandemic wreaking havoc in the United States, as some mad people take to blaming all Asians for being the initiators of the pandemic.

Contrary to what is widely believed, despite Donald Trump being out of office, the crimes against Asians have only increased. For so long, Asian crimes were discounted as fallouts of the alleged anti-Asian rhetoric which the media accused Trump of splurging. However, statistics show that Asians are usually targeted by persons of colour – which by the way, form a heavy voter base of the Democratic party. Do we now start blaming the Democrats and Joe Biden for the crimes against Asians? How would they feel about the same? But sane individuals will not do so, as blaming entire communities for the misdeeds of a few is a sign of intellectual hollowness.