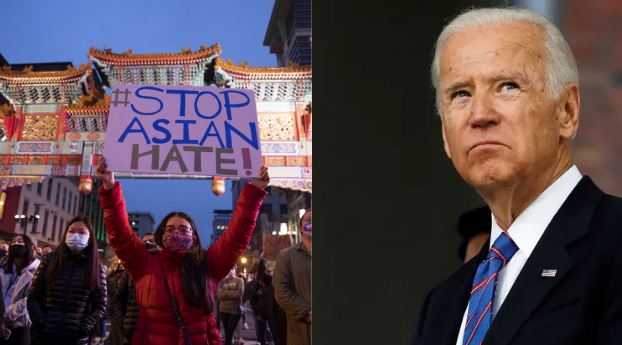 As per reports, many Asian American activists claim that their warnings that racist feelings would continue to manifest in violence were ignored and that mounting fears and anxieties were downplayed. These statements at a time when Joe Biden has been vocal about his support against the racism faced by Asian Americans tells us that he knows nothing more than virtue signalling.

While Joe Biden claims that he is with the Asian American community, but since his arrival, he has done nothing to address the blatant racism faced by the community in America’s top universities. Last year, first The New York Times and then others reported that the U.S. Justice Department plans to investigate and sue colleges over alleged illegal discrimination in admissions. Then a word came from the Justice Department that the focus would be on a suit against Harvard University claiming that the institution discriminates against Asian American applicants. However, no action has been taken since.

In addition to Harward, Yale University illegally discriminates against Asian Americans and White applicants in undergraduate admissions, the Justice Department told the school in a blistering letter that cited a two-year investigation and demanded the college immediately change its process.

Asian American and White people have only one-tenth to one-fourth of the chance of being admitted as African Americans with comparable academic credentials, according to the government.

“There is no such thing as a nice form of race discrimination,” Assistant Attorney General Eric Dreiband said in the letter. “Unlawfully dividing Americans into racial and ethnic blocs fosters stereotypes, bitterness and division.”

At that point in time, voices were raised, but Democrats even then maintained strategic silence. In the name of affirmative action, the Ivy League colleges are discriminating against a very hardworking and dedicated minority community based on their race. Colleges discriminate in unfair ways against Asian American applicants. Stories of Asian applicants with perfect grades and test scores getting turned down by the top institutions are being reported more often in recent times.

There are studies that suggest Asian American applicants need to have higher grades and test scores than other applicants (including white applicants) to gain admission to top colleges. All these concerns were not considered important enough to be addressed. The community is starting to take to the streets, and Joe Biden is again doing what he does best, virtue signalling.