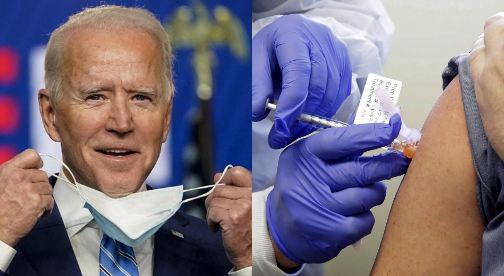 Biden came to power on the back of many populist promises. However, the most prominent of all his promises was anti-racism. Throughout Biden’s political campaign, Democrats ridiculed Trump supporters as White Supremacists, and shadow groups like far-left Antifa supported Biden in the garb of protesting against racial violence.

So, when Biden came to power, he was expected to usher in the most glorious period for the Blacks and Hispanics in the backdrop of Democrats’ support to the Black Lives Matter (BLM) protests. However, now that Biden is in power, we are looking at an unexpected side- Biden’s ‘in-your-face’ racism. He has a horrible vaccination plan that threatens to leave the Blacks and Hispanics behind, while rich communities get a free run over absurd excuses.

The issue is that Biden’s vaccination policy is creating a clear racial divide. On Tuesday, Biden announced plans to distribute millions of masks through target outreach to lower-income, homeless and minority Americans.

Basically, underserved groups like Blacks and Hispanics are being given only masks for survival amidst the ongoing Pandemic. The White House declared, “The Administration will deliver more than 25 million masks to over 1,300 Community Health Centers across the country as well as 60,000 food pantries and soup kitchens, reaching some of the nation’s most vulnerable populations… Recipients will be encouraged to take an individually wrapped package of two masks for each person in their household.”

But what about the vaccines? The real life-saving equipment. Well, they are somewhat reserved for the rich, or the wealthy and privileged (read Whites and Asian Americans). On Tuesday, there was a major hue and cry in the media after reports revealed the circulation of online access codes that allowed wealthy and privileged Los Angeles locals to schedule COVID-19 vaccinations, which were originally supposed to be administered to other minorities.

So, basically, Asian Americans and White Americans are getting vaccinated with shots intended for Blacks and Hispanics. But why? Can’t the state officials simply run a small background check before administering the vaccines? There is an excuse though we can’t promise that it would satisfy your conscience.

Brian Ferguson, a spokesperson for the California Governor’s Office of Emergency Services, which is managing vaccine distribution at Cal State LA and the Coliseum said, “We have set aside a number of vaccines a day for local community organizations who can may [sic] serve non-English speakers, elderly people … any number of people who may need a vaccine but may not be able to access it via an online system.”

Ferguson added, “Each group is allotted a group of appointments. Those individual community organizations may have 50 or 100 slots and there’s an access code to access these appointments on the My Turn website. We have seen that some of these groups have forwarded those codes to their members and then those members are forwarding them to the wider public.”

But we again come back to the same question- why no background checks with documentation? Well, Ferguson reasoned, “One of the reasons we’re doing that is because the communities we’re serving, we understand there may be folks who have different immigration statuses and we want to be cautious that we’re not scaring or intimidating people.”

Now, you see, the administration wants you to believe that background checks are not being made only in order to protect illegal immigrants.

So, basically, the Biden administration and California State officials want us to believe that the rights of Blacks and Hispanics are not being properly guarded because they have to protect illegal immigrants.

Right now, there is no data. But it is clear that every day, vaccines meant for minorities like Blacks and Hispanics are being given away to the rich and prosperous. We know that this has happened in California and New York, both of which are Democrat states. The message from Joe Biden’s administration is loud and clear- vaccines for the rich, and masks for the poor.

It is however shocking that Biden, who came to power by polarising the Blacks and Hispanics, has abandoned them almost within a month of assuming office.