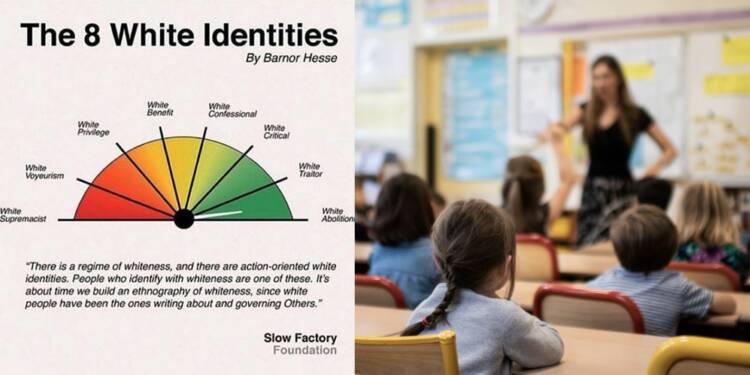 When you send your kid to school, just remember that whatever he or she reads or learns today is going to stay with the child forever. So, what are your kids learning? What if told you that they are being systematically indoctrinated to see race in everything? What if we told you that your kid is being made to feel guilty about his/her heritage? This is what is, unfortunately, happening in many schools across the US.

Journalist and anchor, Tucker Carlson has specifically spoken about the school district in Buffalo, N.Y. to illustrate how American kids are being indoctrinated.

The Buffalo school district’s “first days of school” lesson plan itself gets quite political. It begins with a question- “Do Black Lives Matter in America?” By the end of the lesson, it declares, “Students will be able to understand the need for the Black Lives Matter movement.” Now, the effect is to indoctrinate the kids from the word go, as a school district goes as far as endorsing a political movement in the minds of young, impressionable kids.

At the end of the lesson, they are again asked a leading question that reads, “What do you think about our society being organized into separate, nuclear family units?” The intended implication is that it’s immoral. Kids are being taught that their own families are immoral and we promise this is just the tip of the iceberg.

Buffalo Public Schools actually go on to suggest that George Washington, who founded the USA, was a fraud. These schools also try to convince little kids that Americans should celebrate Indigenous Peoples Day, rather than celebrating Thanksgiving. By the time, these kids enter high school, they are asked even more controversial questions like “why would someone engaging in rioting be protected under the First Amendment?” Free speech extremism thus gets a clear go-ahead.

Carlson clarified that he wasn’t trying to single out Buffalo. He claimed that middle schools across the US were dispensing a similar brand of education. Schools in several cities including Seattle, Portland, Ore.; Los Angeles; Chicago; Milwaukee; Boston; Washington, D.C.; Philadelphia; and Baltimore are endorsing Black Lives Matter, even though it is a political party.

The point is to make white American children feel guilty over racial issues. Before they can even grasp elementary concepts of science, math or history, they are supposed to feel apologetic for the wrongs committed by their forefathers. And since the entire process is based on the vilification of American heritage on a purely racial basis, the net effect will be that these kids could grow up hating their own heritage.

Kids are actually getting rated on the basis of their ‘whiteness’, which sounds both pathetic and racially prejudicial. A New York-based school, for example, faced criticism only recently for asking parents to rate their ‘whiteness,’ outlining eight stages for the “tool for action”.

The graphic, sent out by the principal of the East Side Community School in New York City, was posted on Twitter, after which it went viral on the social networking site. It was published by Barnor Hesse, Associate Professor at Northwestern University.

The graphic by Slow Factory Foundation says, “There is a regime of whiteness, and there are action-oriented white identities. People who identify with whiteness are one of these. It’s about time we build an ethnography of whiteness since white people have been the ones writing about and governing others.”

Over the past four years, White Supremacy and racism have become hot political topics in the US for definite reasons. A lot many people gain big out of debates on White Supremacy. But taking the propaganda to young kids of an impressionable age in American schools has probably gone a bit too far.

American kids are being systematically indoctrinated now and a conspiracy is underway to ensure that these kids grow up to hate their own heritage.