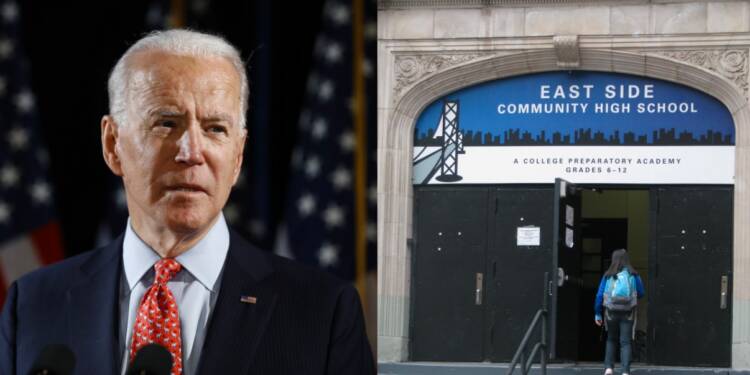 White hate is catching up in the USA, it had to with so much hate for being spewed up by the White House. Now, it has reached an unprecedented level, as a school in New York is asking parents to rate themselves on how white they are.

A New York-based school is being criticised for asking parents to rate their ‘whiteness,’ outlining eight stages for the “tool for action”. The graphic, sent out by the principal of the East Side Community School in New York City, was posted on Twitter, after which it went viral on the social networking site. It was published by Barnor Hesse, Associate Professor at Northwestern University.

The graphic by Slow Factory Foundation says, “There is a regime of whiteness, and there are action-oriented white identities. People who identify with whiteness are one of these. It’s about time we build an ethnography of whiteness since white people have been the ones writing about and governing others.”

The School has since been criticised and condemned for its actions. Christopher F. Rufo Director at Discovery Institute’s Centre on Wealth & Poverty said “SCOOP: The principal of East Side Community School in New York sent white parents this “tool for action,” which tells them they must become “white traitors” and then advocate for full “white abolition.” This is the new language of public education.”

SCOOP: The principal of East Side Community School in New York sent white parents this "tool for action," which tells them they must become "white traitors" and then advocate for full "white abolition."

This is the new language of public education. pic.twitter.com/0XA3xUpcuT

Jack Posobeic called it “more Genocide talk”, while Andrew Follet said, “We need to end the public-school monopoly of Wokist bureaucrats to save the concept of education.”

We need to end the public school monopoly of Wokist bureaucrats to save the concept of education. https://t.co/a4tnVASvR2

This was set to happen one day or the other. Since Biden’s ascension into the White House, he has upped his ante on social issues and has targeted the white supremacists.

As Biden declared war against the white supremacists, he generalised a whole group of people as extremists and domestic terrorists. In the same breath, Biden also removed the travel ban from Muslim countries justifying that whole society, religion or a country cannot be generalised as terrorists.

It’s not just limited to Biden and his agenda. The whole left-libertarians are in on it too. Representative Alexandria Ocasio-Cortez, for starters, said that there are “legitimate white supremacist sympathisers” at the heart of the new GOP caucus in the House of Representatives. Cortex, being the left-loony that she is, even took to alleging that the white supremacism of Republic representatives was being ‘condoned’ by senior GOP members.

Anchor and Chief National Security Correspondent at CNN, Jim Sciutto took to Twitter to say that right-wing and white supremacist extremists are a greater threat to America than Islamist terrorists.

And former CIA director John Brennan called the threat from domestic violent extremists ‘much more challenging than the threat from foreign terrorists during a discussion at MSNBC. Brennan also came out in wholehearted support of the Department of Homeland Security, under the Biden administration, issuing a bulletin warning that some angry with the presidential tradition and “other perceived grievances fuelled by false narratives” could commit violence across the country.

Moreover, the Biden administration has picked a proven anti-white activist Pamela Karlan as the in-charge of the Justice Department. The Stanford Law professor Pamela Karlan is a long time Democratic donor and self-proclaimed “snarky, bisexual, Jewish” woman who has long had a chip on her shoulder against straight, white men.

Earlier, at a city hall meeting on Wednesday, President Biden said that “white supremacists are the greatest domestic terror threat in America.”

The US President has said that those who support white supremacists are “demented” and “dangerous.”

The action undertaken by the school in New York should be a wake-up call for the Biden administration and the society in general. They have to understand that the path they are going down is guided by hate, antagonism, and resentment and the whites will become the ultimate sufferers in their own country.