‘Only white people can be racist,’ Government employees in the US get proper propaganda lessons 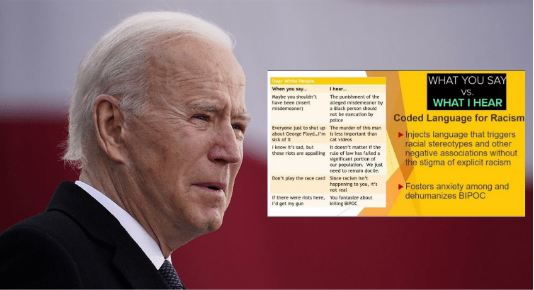 Talks about the state of racial inequality and perceived prejudices, which were the flag bearers of Democrats’ election campaigns have been conveniently flung into the trash. According to the reports, government employees in San Diego County of the American state of California are being fed the poison of racism into their veins by the newly elected Joe Biden government. The San Diego County government staff are being compelled to take lectures claiming that only white people can be racist.

A training participant told the Washington Examiner that the health and human services agency required employees to spend six hours watching the course on the internet. “Racism is a WHITE problem” and “Only white people can be racist” is the message that is being delivered. The title of the course is ‘power and privilege.’

The employee claims that instructor Reggie Caldwell told participants, “Only white people can be racist, no other BIPOC’s (Black, Indian, and people of color) can be racist.”

The radical leftist deep-state of the current US government is working hard on the principles of creating an atmosphere of racial inequality where it will be a crime to have a certain skin colour.

This state-sponsored racial discrimination programme of the Biden administration might soon become a nationwide plan of systematic persecution of people with lighter skin tone. Readers might get reminded of instances in world history when the colour of the skin of a person would be the reason for their right to live or not. It is quite similar to the apartheid system in South Africa and Indophobia in western countries when a person of colour was seen as an outcast, barbaric and uncivilised individual.

During the 19th and 20th century, indigenous humans from across the globe were ‘displayed’ in cages for the viewing pleasure of western society. Such ‘human zoos’ which were part of several ‘world fairs’ displayed the ‘superiority’ of the western culture and relative inferiority contrasting with the primitive state of people from other cultures. This derogatory treatment of the life of a fellow human drew severe criticism. But it is now seen that history is going to repeat itself.

The recent case of brainwashing of small kids in Buffalo, New York with racial prejudices is an alarming incident. The divisive forces which are fed by the Biden administration are working hard to project the European origin population as the common villain. The indoctrination of kids from such a young age will surely result in them being grown into hating a person who looks different.

The American dream defines the fact that any hardworking American can make his/her name in any field irrespective of the colour of his/her skin. People of colour are an indispensable part of the cultural heritage and society of the United States. It is the diversity that gives America an advantage to become the world’s strongest country that it is today. It is a country whose foundation was laid by its founding fathers but it was the immigrants from every direction of the world who moulded American identity with blood, tears and sweat.

The divisive politics that focuses on putting one race ahead of others in society is harmful to society. Human civilization has already suffered at the hands of racial politics for millennials. The fact that racial discrimination even exists in the 21st century is a matter that should bring shame to the society as a whole. Schools should focus on teaching little kids the importance of humanity paired with the equality of all citizens.

They should refrain from feeding the venom of hatred against a particular race at all. Humans are dynamic and social beings, they learn from their mistakes and flock together against any potential threats. It is this nature of humans that has made them the masters of the planet Earth.

The world looks towards the US with hopeful eyes. They seek inspiration from the successful experiment that is the US, that how it managed to become what it is today with all the internal differences and hindrances. Its leadership must learn to inculcate the values of fraternity into its citizens rather than hatred towards one another.