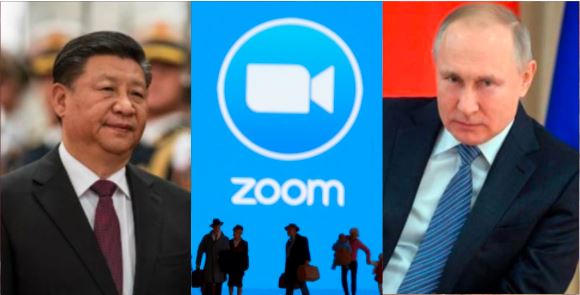 Intellectuals world over suffer from similar problems, that are, making things overly complex their credentials and looking at things from a myopic perspective which is enforced by their own biases. And while these intellectuals have time and again warned of a Sino-Russian alliance, Vladimir Putin’s actions tell an entirely different story. Russia on April 7 warned Zoom that it could be completely blocked in the country after local media reported that it had restricted access to government agencies and state-owned companies.

When one talks about alliances and strategic as well as military partnerships, it is expected that these countries will not try to compromise each other’s security architecture. But time and again China has been caught by the Russian authorities doing exactly the same. The Russians in the span of a year caught Chinese authorities trying to steal its military technology, compromise Russian vaccine diplomacy, use TikTok to spread instability in the country and now it is the turn of Zoom. While, we at TFI, have covered these incidents extensively, it is flabbergasting to see so many intellectuals turn a blind eye to these developments and still talk about a Sino-Russian alliance.

In June last year, the company shut down the account of an activist who was holding an event on the video conferencing platform to commemorate China’s Tiananmen Square crackdown a politically sensitive topic for the Chinese Communist Party.  Although Zoom is a US-founded company and its founder Eric Yuan is a Chinese immigrant who is now an American citizen, the company’s development team is “largely” based in China, according to Zoom’s regulatory filing from early 2020. To put it bluntly, Zoom can be considered a Chinese company in the cloak of being a US entrepreneurial success.

Russian media reported on Wednesday that Zoom had banned its distributors from selling to government agencies and companies in Russia and a number of post-Soviet countries known as the Commonwealth of Independent States over concerns of new US sanctions against Moscow.

Alexander Bashkin, a member of Russia’s upper house of parliament, told the state-run RIA Novosti news agency that Moscow could be forced to respond. “Russia is not a supporter of sanctions, but if Zoom takes such a decision with respect to government agencies and state-owned companies, then it is possible to block this service in our country as a reciprocal, symmetrical measure,” the Federation Council lawmaker was cited as saying.

Vladimir Putin is abreast of the Chinese intention and has been taking actions continuously to counter any Chinese actions to undermine Russian interest. Russian President Vladimir Putin has created a well-laid plan to dismantle any semblance of the Chinese Belt and Road Initiative from the region. These actions of Moscow coupled with the INSTC make a killer combo to remove the practicality of the initiative. The International North-South Corridor is a multi-mode network of ship, rail, and road routes for transporting goods between India, Iran, Afghanistan, Azerbaijan, Russia, Central Asia, and Europe. The objective of the corridor is to increase trade connectivity between major cities such as Mumbai, Moscow, Tehran, Baku, Bandar Abbas, Astrakhan, Bandar Anzali, and others.

Education Minister Sergei Kravtsov said that Russia’s schools would not be affected by a potential Zoom ban, adding that the country’s new video-conferencing system ‘Sferum’ could serve as a replacement. “We are ready for any situation. And of course, we will focus more on our own software,” he was cited by the state-run TASS news agency as saying. Russia’s nuclear agency Rosatom said it would likewise have no problem with Zoom being banned.

Historically, the Chinese Communist Party has never been a loyal friend of the USSR and the trend has since continued with Russia too. Thus their bonhomie is a well-acted show and their friendship is just a phase. The latest action on Zoom is an addition to the plethora of proofs that establish that Russia and China are not strategic partners but are just sticking together because of convergence of interests.