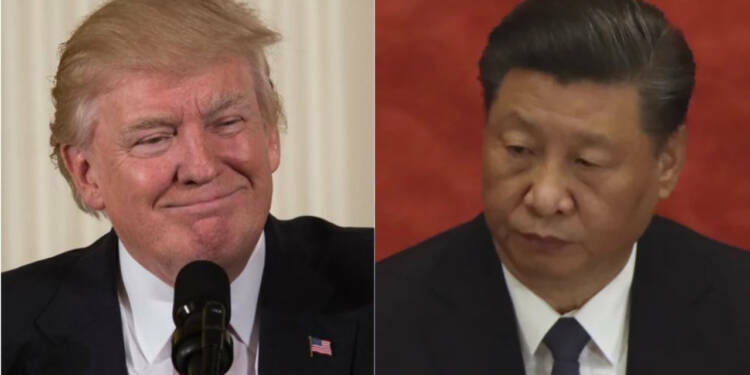 China’s 14th five-year plan promises to make the country self-reliant. South to the Himalayas, India, led by Prime Minister Narendra Modi itself is waging a massive self-sufficiency campaign. Taking a cue from India, the CCP too has realised that in the post-pandemic world order, things will no longer remain as rosy for it as they have been for the past two decades. The paper dragon plans to cut its dependency on the singular exports side of the economy, and boost domestic consumption. Mind you, China, as of now, relies heavily on exports around the world, to the extent that its economy is called an export-dependent one.

Yet, recent developments and geopolitical readjustments around the world have sent warning bells ringing in Beijing. One man is responsible for ensuring that Xi Jinping begins fearing the collapse of the Chinese economy. And that man is none other than former US President Donald Trump. Being an export-driven economy can ensure fast growth, but things can go south for a multiplicity of reasons in a split second. China’s economy, already burdened by debt-ridden and fragile financial institutions, will not be able to survive a global blowback if countries decide to cut down their imports from China. Essentially, the Chinese economy is in peril, and for the next five years at least, its fate hangs in the balance.

Of course, countries around the world like India, Japan, Australia among others have led the crusade of convincing the global community to distance themselves from China and its supply chains, but former US President Donald Trump has really done what others could not. Trump made Xi Jinping return to the inward-looking authoritative socialism, which, as history is a testament, will end up ruining China. As a matter of fact, the 14th five-year plan of the CCP in itself is based on the actions taken by Donald Trump while he was in office.

China will focus on implementing its “dual-circulation strategy,” according to which it will reduce its reliance on external demand, in favour of increased self-reliance. While the CCP government will continue to “emphasize exports”, it will also increase import substitution and introduce supply-chain safeguards, especially where American firms are closely involved. These safeguards were mandated after China learnt in the past four years of Trump just how susceptible its supply chains were to the will of America. Now that Trump is no longer in office, and Joe Biden is more or less toeing China’s line, the time is opportune for Xi Jinping to ensure that a return of Donald Trump to the White House does not cause any future discomfort to Beijing, which his past four years have.

Why is China betting on self-reliance and self-dependency, one may ask? Because Donald Trump’s trade tariffs on China, which continue as of this day, have been dealing a huge blow to the paper dragon. However, China has no option but to export goods to the US, since its economy is dependent on such exports. On the question of digital and high-tech technology, Donald Trump banned American semiconductor technology from being transferred to China, causing a severe derailment of the paper dragon’s tech plans. So, to overcome the US ban on semiconductors, China has now resolved to research and subsequently establish hegemony over the global chip market. It is going to be an incredibly tough and long journey, but Xi Jinping’s ego is just too large to not take the chance.

Experts believe, however, that the CCP’s 14th five-year plan, like all other previous plans, is nothing more than a pompous wish list aimed at satiating the ego of top Chinese politburo members, who will, for the next five years, believe that their nation is doing something. It is, for instance, not easy to suddenly drive organic domestic consumption. The people need money to spend. Right now, Chinese youngsters thrive on debts. So, the domestic consumption will have to be aided by banks at every level, which will end up in bad debt statistics in China hitting the sky.

Xi Jinping is a despot. He is a totalitarian socialist who seeks to insulate China from the world, while also exerting global influence. He plans to take China back to the days of Mao Zedong. Deng Xiaoping, who ushered in a wave of market-friendly reforms in China and who is often regarded as the architect of modern China is not a person who Xi idolises. Instead, he is undoing all that Xiaoping achieved. Attacking the private sector, insulating China, oppressing people and focusing disproportionately on the military are parameters that define Xi Jinping. The CCP’s five-year plan also intends to make China Xi Jinping’s personal playground, where his fantasies and will reign supreme.

Donald Trump, even after leaving the White House, is ensuring that China thumpingly keeps hitting the self-destruct button out of its madness to assume the role of a world leader replacing the United States. Almost all of China’s goals for the next five years are driven by an inherent fear of Donald Trump or someone like him entering the White House once again. To evade times such as those, China is indulging in wishful thinking.