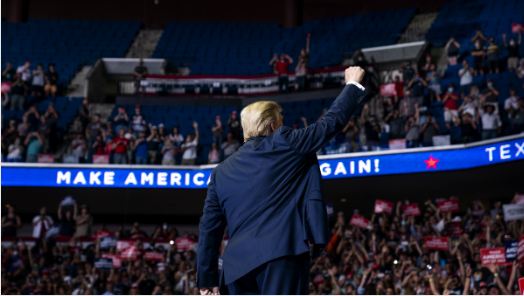 Donald Trump is back in the political mainstream and this must bug many including the whole Democratic cabal. Democrats, all this while tried to make sure that Donald Trump should not able to return to politics so that there is no apparent threat to the stability of the Democratic regime and going ahead the Democrats will not be forced to deal with any Republican who can threaten their hold on power. However, the attest news must come as a rude surprise to the whole establishment.

Former President Donald Trump is resurrecting his small-donor fundraising operation for the first time since leaving office, as part of a political push to carve out a large position in the 2022 midterm elections and extend his financial network ahead of a possible 2024 comeback bid. The energetic, all-caps texts and emails are making a comeback and the red “Make America Great Again” caps have returned to the shelves.

Although it was clear that Mr Trump would make a comeback, the real debate was when and how. Trump reopened his online merchandise store on Wednesday, which were closed since the January 6 Capitol insurgency when Shopify, the e-commerce firm that had been hosting it, shut it down. The former president’s political operation also sent text messages to supporters leading them to the store, which is selling new products such as t-shirts with the slogan “Don’t Blame Me, I Voted for Trump” on them.

Read More: Georgia is Trump’s ticket to the White House and Democrats are handing him an easy victory

Earlier too Donald Trump has been giving signals of his continued concern for the Republican Party and the United States. Earlier last month at around the same time, former President Donald Trump released a fiery statement, urging his supporters to stop giving money to Republicans who oppose his ‘Make America Great Again’ initiative. Instead, he asked his voters to donate to his campaign website and the Save America Political Action Committee (PAC), rather than the Republican National Committee (RNC). In his statement, Trump said, “No more money for RINOS, they do nothing but hurt the Republican Party and our great voting base—they will never lead us to Greatness. Send your donation to Save America PAC at DonaldJTrump.com. We will bring it all back stronger than ever before!”

Trump’s letter appeared to be a retaliation for the RNC’s dismissal of his cease-and-desist letter, in which he demanded that the committee stop using his name and image to collect funds. According to a Trump advisor, the former president also wrote to the National Republican Senatorial Committee and the National Republican Congressional Committee. This was an obvious sign that he is going to make a comeback, but the latest developments have laid the groundwork for the same.

Read more: Looks like all is not well in the GOP as Donald Trump asks voters to not give a single penny to the party

Trump’s email and text messaging machine which blasted out thousands of fundraising appeals during the 2020 election has been largely dormant since he left the White House. For weeks, the former president’s top political advisers, including Gary Coby and Brad Parscale, have been working behind the scenes to start up his financial apparatus.

The latest effort illustrates how Trump is trying to capitalise on his considerable small-dollar (common man) base to establish a massive war chest, bolster like-minded candidates and grow his database of supporters. “I expect former President Trump to remain a force in small-dollar fundraising. He maintains a pretty potent online fundraising base, which he can use for his political committees,” said Tim Cameron, a Republican digital strategist.

Donald Trump is not taking the support of the Big Businesses and is relying on the common folk to gather around him and, in the coming years, end the Democratic regime which is running without any direction. The Trump team sent out text messages to supporters on Wednesday telling them he was giving them “PRIORITY-ACCESS” to the new store, which they described as the “ONLY place to get your OFFICIAL Trump Merchandise”. They are also expected to send out emails promoting the shop.

Trump’s aides claim that the switch to conservative groups like WinRed and Campaign Nucleus represents a willingness to wean themselves off of big tech firms that shunned Trump after the Capitol riot. The Trump group is ready to make a comeback to the political big stage and is making all the necessary arrangements for the same. And these Store, Slogan and Campaign are part of this upcoming Donald Trump-led Blitzkerg.