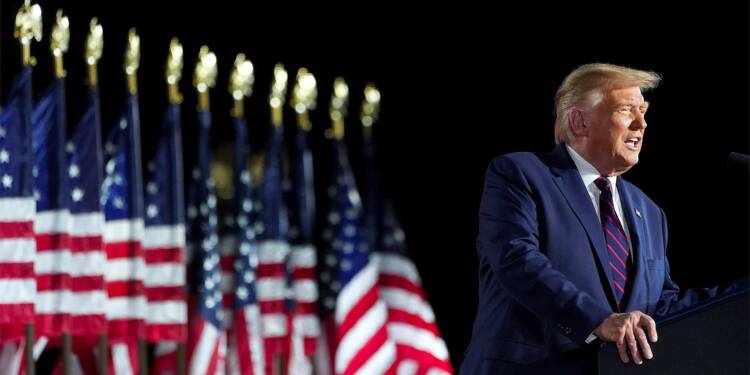 Donald Trump is back in the game. To be fair, he was never really out of it in the first place. But yes, after Joe Biden took over the presidency of the United States, Donald Trump’s first-ever scathing attack has come out in the form of him supporting the much-needed voter reforms passed by the state of Georgia. In 2016, Georgia was bagged by Donald Trump, although he lost it by a slim number of votes last November. So, Trump is staging a comeback for himself from this very state, where the former President also believes he was deprived of votes due to shady reasons.

After Major League Baseball’s decision to boycott Georgia, and with big corporate houses issuing statements against the peach state, Donald Trump has made it a point to instil a fighting spirit in the people of Georgia and ensure that they stand up to motivated woke organisations and corporate houses with an inclination for political absurdity. In a statement, Trump said, “Baseball is already losing tremendous numbers of fans and now they leave Atlanta with their All-Star Game because they are afraid of the radical left Democrats… Boycott baseball and all of the woke companies that are interfering with free and fair elections. Are you listening Coke, Delta and all?”

Donald Trump and the Republican party, over which the former president continues to have unprecedented sway, have begun a wave of nationwide electoral and voter-related reforms, the need of which was necessitated after some alleged discrepancies were brought up in last year’s elections. Now, the GOP plans to streamline and codify the voting process and guidelines across states. The Democrats, for shady reasons best known to them, are not liking this reform wave a tad bit.

Yet, Donald Trump has embarked on a journey from where there is no turning back. As Republicans of Georgia, and across the country begin rallying behind Donald Trump, Georgian Democrats too are finding it increasingly difficult to stand by Joe Biden’s mindless advocacy of boycotting their state. Sen. Jon Ossoff, for instance, decided to deviate from the Democratic line, and said, “I absolutely oppose and reject any notion of boycotting Georgia…Georgia welcomes business, investment, jobs, opportunity, and events. In fact, economic growth is driving much of the political progress we have seen here. Georgia welcomes the world’s business.”

Democrats of Georgia are against the companies and organisation boycotting the peach state since the popular sentiment is so overwhelmingly in favour of the voter reforms. Meanwhile, there is also a palpable and seething wave of anger that has gripped Georgians following MLB’s decision to pull out the All-Star games scheduled for July. Woke companies are coming out and preaching to Georgians how their rights are being taken away in an undemocratic manner, while all that is really happening is the codification and streamlining of democracy in the state.

Democrats, led by President Joe Biden, have lost the plot. While they call for Georgia’s boycott across the country, in the state itself, they have landed in a tight spot. Donald Trump is magnificently exposing Democrats for what they are – shady creatures opposed to electoral reforms because the current system is disproportionately tilted in their favour. Although Georgia is just the beginning, here on, Donald Trump seems all set to launch a nationwide campaign, detailing how electoral reforms are a necessity, and how selfish Democrats are dead opposed to the same.

The current system is heavily weighed against Republicans, and particularly against Trump, which is something that does not need to be comprehensively detailed. The most recent incident which proves that Trump and the GOP have been eternal victims of the poisonous Democrat-media nexus is the retraction of a brazen hit job by the Washington Post. The left-leaning publication lied through its teeth three months ago, when it claimed that Trump had pressurised Georgia election officials to find votes for him so that he could win the crucial state, which he lost by just about 11,700 votes. In March, WaPo updated its story and admitted that it had made a mistake, pointing out that Trump never made the remarks he was accused of. Ironically, it did not apologise for the same.

The incident proved how easy it was to falsely accuse Republicans and Donald Trump of subverting Democracy. The same is happening now, but Trump is now giving it back as good he gets. He is setting the stage for making another entry into the White House, and the journey has begun from Georgia.