‘You boycotted Georgia, will you Boycott China too?’ – this question rattled Jen Psaki so much that she lost it 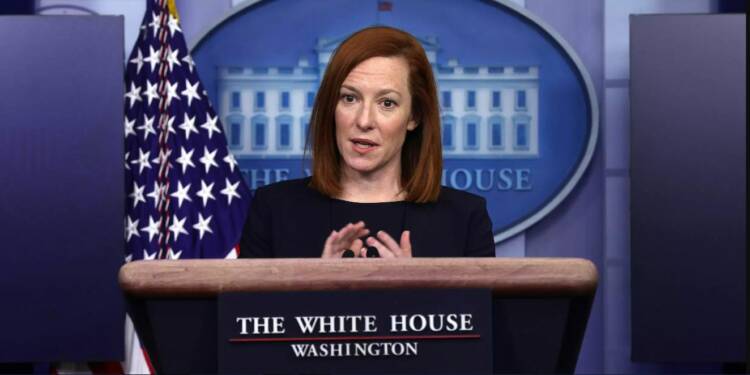 Major League Baseball (MLB) is a woke organisation which loves to virtue-signal. White House Press Secretary Jen Psaki is a woke individual, who loves moral grandstanding. President Joe Biden is a woke and old man, who loves absurdity. The common factor binding all of them, however, is an undying and untiring love for the Chinese Communist Party and its genocidal shenanigans against Uighur Muslims in Xinjiang, pro-democracy protestors in Hong Kong and Tibetan rebels. So, the White House and organisations like MLB are comfortable until their woke activism remains confined within the territory of the United States. Introduce a country like China and lots of money into the equation, and they all stand magnificently exposed.

White House press secretary Jen Psaki, for instance, did not like being probed about whether Joe Biden would take a call on the subject of the United States boycotting the 2022 winter Olympics in Beijing or not. Philip Wegmann of RealClearPolitics asked Jen Psaki a pointed question on Friday, probing whether Joe Biden would advocate and decide upon a boycott of the winter Olympics in Beijing with just as much enthusiasm as he backed MLB’s boycott of the red state of Georgia. Wegmann asked, “The president voiced his support for MLB making a decision about the all-star game in Georgia. I’m wondering when we can expect final determination from the president about the United States participating in the Beijing Olympics given that he said the Chinese president doesn’t have a ‘democratic bone’ in his body.”

Just when Jen Psaki began a vague answer to the question, saying, “Well I think the U.S. Olympic Committee would play a big role in…,” Philip Wegmann reminded the press secretary that his question concerned the stand of Joe Biden on the issue. By now, Psaki was visibly frustrated and angry. How dare anyone question the White House’s and Joe Biden’s normalised bizarrity? She said, “I don’t know if you heard the question, the answer that happened a few minutes ago where we addressed this and I answered the question and I gave a little more context, but maybe you weren’t paying attention to that part.”

.@RealClearNews's @PhilipWegmann asks Jen Psaki if the Biden White House is so adamant about having MLB move its All-Star Game from Georgia because of the voting law, why aren't they calling for a boycott of the 2022 Winter Olympics in Beijing?!

The question which Wegmann asked was a very valid and logical one. Joe Biden can of course, no matter how bizarre and unconstitutional it may be, advocate for the economic boycott of an American state. What he should also do, however, is actively advocate the boycott of the Beijing winter Olympics. Yet, he is not doing that. Being a CCP stooge and having filled his administration with the proxies of China, Joe Biden has been rendered incapacitated to stand up to Chinese genocidal inclinations and authoritarianism. Democrats and their ring leader are going over and above themselves to call for a cancellation of Georgia, while the CCP is given a free run by the world’s most powerful country to continue inflicting a genocide on its people.

Joe Biden is not alone when it comes to being a high-value hypocrite. In fact, as reported by TFIglobal recently, Major League Baseball (MLB) is also a compromised American organisation. While MLB has boycotted Georgia, it has also signed a 3-year deal with the Chinese tech major Tencent. Tencent will be able to download MLB games in a variety of Asian countries until 2023 under the current arrangement. In 2018, the MLB and Tencent signed a new partnership, granting Tencent streaming rights to 125 games in China. Needless to say, MLB must be earning big cash by entering into a renewed agreement with Tencent – a company which has ties to the genocidal CCP. Yet, MLB will not issue even one statement condemning Chinese excesses, leave alone boycott the paper dragon and its companies.

The outburst of Jen Psaki is a clear sign to American patriots and a section of American media which is still left with some spine – to simply not cross the red line with the Democrat rulers of America, especially on the question of China. If they do, they will be side-lined, scolded and cancelled by the woke army of the United States.