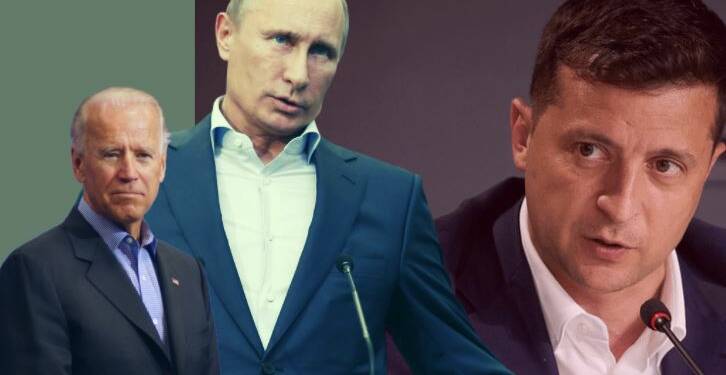 It was obvious that the Biden administration‘s foreign policy will have a boomerang effect and may plunge many regions into chaos. This is what has occurred in Eastern Europe. The disproportionate attention Biden administration has focused on its Russian rivalry at a time when Russia poses no immediate threat was in itself a diplomatic blunder. Now, the forces amassing on the Russia-Ukraine border may result in a damaging war for which Joe Biden would be responsible.

Any significant escalation in Ukraine’s conflict with separatists centred along the Russian border, according to a senior Kremlin official, will result in Ukraine ‘ceasing to exist’ as the world knows it. Dmitry Kozak, the deputy chief of staff to Russian President Vladimir Putin, said during a virtual meeting of experts on Thursday that if Ukrainian forces launched a major offensive, Russia would be forced to protect its citizens living in eastern Ukrainian border regions that proclaimed independence from the central government in Kyiv seven years ago.

Biden administration should have singled out China as a threat to be dealt with. However, dividing the resources to challenge Vladimir Putin in the traditionally Russian zone of influence of Eastern Europe is going to bring in drastic changes. Russian President Vladimir Putin is not someone who can take challenges and intimidation sitting down. Russia warned that growing violence in Ukraine could set off a broader military conflict, brushing off German Chancellor Angela Merkel’s call to pull back troops gathered near the Ukrainian border.

People all over the world are mentioning Russia and Ukraine in the same sentence. Tensions have heightened in Ukraine’s eastern, rebel-controlled province. Last Friday, four Ukrainian soldiers were killed by a mortar assault, possibly the first breach of the July 2020 ceasefire agreement between Russia and Ukraine. According to the Joint Forces Operation, the assault in the hamlet of Shumi was the most serious breach of the truce this year, which has resulted in a major reduction in fighting. Russia is rumoured to be planning an unprecedented offensive against Ukraine in the coming weeks, according to reports on the global airwaves.

Under former President Donald Trump, the Ukraine-Russia tensions were largely forgotten, and violence was greatly reduced between Ukrainian forces and rebel insurgents, which the U.S. and Europe believe to be backed by Russia. Effectively, the Ukraine issue was dead the world over. Yet, ever since Joe Biden has taken over as the U.S. President, there has been a visible uptick between Russia and Ukraine, first in terms of rhetoric and now, militarily as well. It must be remembered that the ceasefire between Ukraine and Russia did not go down well with NATO, which seemed visibly defeated. The ceasefire only further led NATO and Russia-obsessed European nations down the path of irrelevance.

Read More: Biden is trying to create a cold war kind of a situation with Russia to keep Germany in check and NATO from falling out

Now, Joe Biden has made no secret of his affinity for mindless anti-Russia activism. Biden’s aims from the very first day have been those of making NATO stronger than ever before and ensuring that Russia kneels before the formidable ‘Western’ alliance. Following what seems to be a master plan being orchestrated by the Biden administration and the deep state, Ukrainian President Volodymyr Zelensky has been taking multiple anti-Moscow steps and also cracking down on pro-Russia sentiments in the country. Obviously, Vladimir Putin will not be a mute spectator to the same.

The Kremlin’s chief negotiator with Ukraine, Dmitry Kozak, said Thursday that the activities of Ukraine’s army aren’t likely to lead to a large-scale military operation and are more of a public-relations move. He warned, however, that Russia would step in to protect its citizens if they came under direct threat. “Everything depends on how major the fire is,” Kozak said.

The Biden administration has threatened to take action against Russia in response to an alleged cyberattack that compromised software from Texas-based Solarwinds Corp., affecting at least 100 American businesses and nine federal agencies. Biden recently authorised an additional $125 million in lethal assistance to Ukraine to protect its borders with Russia, according to Politico. Inside the US government, there are whispers that action will be taken against Russia in the “coming weeks” for its cyber-attacks on the US.

Russia is not a small country that will take these intimidations and the USA acting in its backyard. Biden is using Ukraine as a scapegoat to engage Russia; however, things may spiral out of hand. As a result of all this, Ukraine may cease to exist and it will be Joe Biden’s fault.