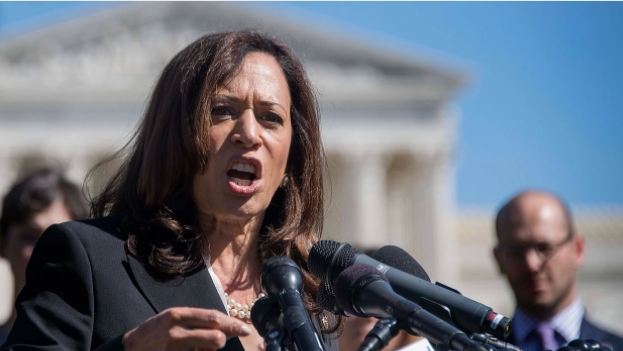 We’ve all heard about Beyoncé’s loyal fan base, known as the Beyhive. US Vice President Kamala Harris is no less than Beyoncé. She too has a committed, loving and feisty online troll army, which is ready to go to any extent in order to protect Harris’ image and to defend her in face of unprecedented crises. The army goes by the name ‘KHive’ and has made the existence of Kamala Harris’ detractors on social media platforms immeasurably painful. KHive targets not just Harris’ detractors, but also her colleagues – who might sometimes disagree with the Vice President.

Disagreeing with Kamala Harris is not allowed in the world of KHive cult members. The cult expects people around the world to worship Kamala Harris – like they themselves do. Those who do not toe the line of extreme Harris fanaticism are hounded and abused on social media. On occasions, they are also threatened with dire consequences. But do you know what the catch in all of this is? Well, Kamala Harris is more than aware of the existence of this troll army and is also in the know of their intimidatory behaviour. Yet, she is perfectly fine with her detractors being hounded for merely having a strong opinion which may not be in line with that of the Vice President.

What is even more worrisome is the fact that KHive can put the troll army of the Saudi kingdom to shame. Saudi crown prince and his coterie have a rather extensive troll farm in Riyadh, which targets the kingdom’s dissenters and critics both domestically and abroad. A prime target of this Saudi social media infrastructure was late journalist Jamal Khashoggi, who was killed and dismembered at the Saudi consulate in Istanbul in 2018. The troll army of the Saudi kingdom was brought into existence by Mohamad Bin Salman’s former top adviser, Saud al-Qahtani. The man was sacked after the killing of Khashoggi. The late Washington Post columnist was among the innumerable Saudi dissidents whose lives were made miserable by the Qahtani army.

Vice President Kamala Harris, however, is giving a tough competition to the Islamic kingdom of Saudi Arabia when it comes to her fans abusing her critics and even playing a role in their mental health deterioration. Recently, when Rep. Ro Khanna started pressing Vice President Kamala Harris to use her procedural power to push a national minimum wage hike a few weeks ago, he found himself targeted by a swarm of online Harris supporters. Khanna was accused of being a ‘misogynist’ and using Harris as a “Black woman bogeywoman” in case the wage hike push fails.

I have great respect for VP Harris and frequently applaud her work. This is a point about process. It’s about getting a $15 wage for millions, not casting blame. Despite what they say now, I don’t believe any Member will vote against a Biden/Harris plan that has $15.

Another KHiver, Chantay Berry last month tweeted a list of ‘progressives’ who “may go through some pretty things soon”. The list included names like Ryan Knight, Briahna Gray, Ana Kasparian, Krystal Ball, among others. At some point, these individuals have been at the crosshairs of Kamala Harris and her flourishing troll army. The primary objective of the KHive cult is to silence the critics of Kamala Harris and turn America into an autocracy in which elected representatives cannot be criticised, even in a civil and sophisticated manner.

The desperation of KHive to silence Kamala’s critics is visible, pointedly due to the fact that the Vice President has been an unmitigated disaster ever since she set foot into the White House. Yet, since Biden is an even bigger disaster, Kamala Harris has had to take up critical decision making and foreign policy handling upon herself, even though she knows close to nothing about international diplomacy. Joe Biden, in a moment of magnanimity, even handed over the border crisis to Kamala Harris, who has proven a disastrous failure on that front as well.

In fact, Harris has gone over 20 days without holding a single media briefing after being given the oversight charge of the border crisis. Yet, Americans cannot discuss these failures of Harris on social media, as an army of trolls and abusers will descend upon them, often with the tacit support of the Vice President and her husband.

Although Twitter came cracking down hard on Saudi Arabia’s troll farm infrastructure, and also permanently suspended the Twitter account of Saud al-Qahtani for violations of the platform’s manipulation policies, the microblogging site continues to turn a blind eye towards Kamala Harris’ cult of fans who have made social media an unsafe place for Americans.

Iran-Israel, Taiwan-China and Russia-Ukraine: Biden is creating flashpoints all around the world and it’s an ominous sign for humanity