Are liberal states in America opening up to Republicans? Data strongly suggests that 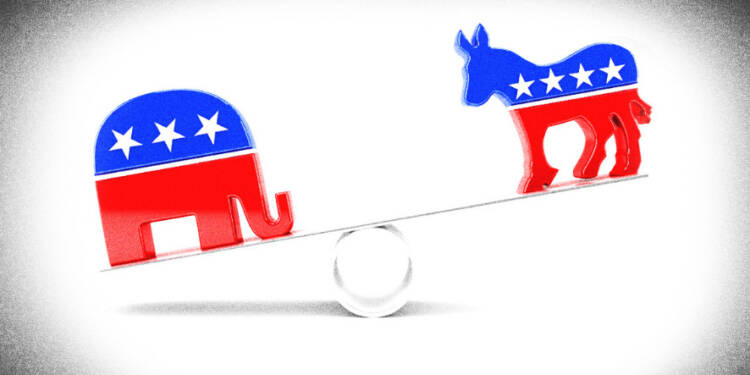 The USA inherently is a capitalist state and what can be more convincing proof than the fact that the liberal cities and states are opening up to the Republican alternative. The latest reports tell us that the extensive accommodation to over socialism that borders communism by an increasingly vocal extremely leftist lobby has made many moderate voters vary of democrats and they are willing to embrace the Republicans.

According to a Fox News analysis of AP election results, President Trump gained nearly 200,000 votes from New York City residents in 2020 compared to 2016: a 4.6% boost. Democrats lost 3% of the voters for Biden compared to Clinton’s count in 2016. The biggest shifts came from the Bronx, Queens and Brooklyn, which were the hardest hit by COVID.

The same report mentioned the comments by Dalton Blaine, who voted for Hillary Clinton in 2016 but flipped in last November because he felt liberal policies were threatening to destroy the city. “Just the deterioration of everything. Of small businesses. Of not really helping them at all,” explained Blaine. “This mentality that we’re just going to shut everything down and then just see where we are, like once we get a vaccine. It was a joke.” She further added that “A big issue for me has been the Democratic Socialists of America,” said Blaine. “They’ve been getting stronger and stronger for the past few years and I don’t really feel like moderates are standing up to them.”

The fact that the moderate Democrats, which were brought to power in the recent elections, are losing their place in the party and Joe Biden embracing the leftist socialist clique in the party has come as a shocker to many working-class and middle-class voters. This has made them disenchanted by the Democratic party and going ahead they are even willing to embrace the Republicans, whom they believe can turn the tide on the increasing socialism in the region.

And this is not it, the people are rethinking their choices countrywide. The 2020 U.S. Moving Migration Patterns Report from North American Moving Services shows Illinois, New York, California, New Jersey and Maryland to be the top five states for outbound moves among people relocating. Interestingly, for inbound movers, the top states were Idaho, Arizona, South Carolina, Tennessee and North Carolina. This establishes the fact that people are leaving the Blue states and migrating to the Red States. Illinois had 31% of people moving into the state and 69% moving out. For New York, it was 35% in and 65% out. California, New Jersey and West Virginia each saw 36% inbound and 64% moving out. Michigan had 60% moving out and 40 % moving in, while Pennsylvania recorded 59% leaving compared to 41% inbound. The leading metropolitan areas for outbound migration were New York City, Chicago and in California; Anaheim, San Diego and Riverside.

Read more: People are leaving the Blue states and migrating to the Red States. The reason is that the Blue ones are practically unlivable

On Wednesday, a Democratic Socialists of America (DSA) candidate and community organiser Rana Abdelhamid challenged incumbent Rep. Carolyn Maloney, a Democrat, in New York’s 12th Congressional District. Justice Democrats, the same party that endorsed Alexandra Ocasio-Cortez for Congress, are backing her. This tells an unfortunate turn of the Democratic party away from its moderate stock and this is one of the more pronounced reasons for the people turning on the Democrats.

Political consultant Hank Sheinkopf told Fox News that, “Republicans in New York City tend to do well or do better, even get elected citywide when there is a crisis. We have a crisis in New York City now,”. “So something will happen. The question is what and how long before it happens?” And from the looks of it, the tide of change is fast approaching.

Biden never wanted to pull out of Afghanistan at any cost, but Trump had left him no options