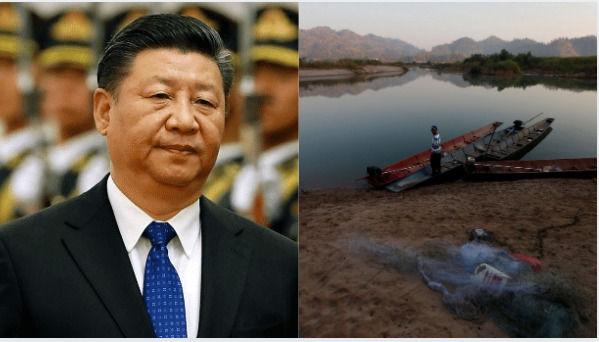 Life has turned upside down for the Mekong basin countries. Thailand, particularly, is being adversely affected due to the fluctuations in the natural rhythm of the Mekong river, and entire ecosystems, river-dependent cottage industries and livelihoods are being destroyed. The sole culprit, as is largely known, is China. The paper dragon has taken upon itself the task of destroying the lives of 70 million people in the Mekong river basin, and to that effect, it has constructed 11 gigantic dams which control the flow of the river. Laos too is a culprit, although a dozen of its dams on the Mekong and its tributaries are funded by none other than China itself.

In the past two years particularly, the Mekong river has begun showing signs of tampering. Dry conditions are an annual phenomenon along Southeast Asia’s great river, but they have changed. According to Channel News Asia, seasons in the Mekong basin have become confused and untrustworthy. The normal flow conditions of the river are becoming a memory. The report also makes it a point to mention how the appearance of the Mekong has changed – signalling an impending disaster upon the river facing an existential crisis.

The Mekong is often defined by its deep ochre colour, reflecting the rich nutrients that are essential for life along its path. Now, however, the Mekong is turning clear and blue. This means that essential sediments and crucial nutrients which aquatic life, soil fertility and entire ecosystems in the region have been dependent on for centuries have gone close to non-existent in the past two years. Turbidity tests conducted by Apichai Ritthigun, the chief of Nakhon Phanom environment office at the Ministry of Natural Resources and Environment have found that there is “barely any” sediment in at least three different river sites.

“The Mekong has abnormality in terms of fluctuations of the water level and the sediments have gone. The river is very clear and turns blue,” he said. “The water level is now in a state of crisis. The river is dry this month every year but what makes it different is that the water is clear.” The people of Thailand, who are dependent on the Mekong river for their livelihoods, are horrified seeing sand islands emerging out of the river. Agriculture along the river banks has become close to an impossibility. In absence of the required sediments, the soil is eroding away and its fertility has already reduced drastically. Once one of the most fertile river banks, now, growing crops and vegetables along the river banks has become unfeasible.

Meanwhile in fish farm operations, during periods of increasingly common drought where seasonal rain is low, oxygen levels drop in the slow-moving water. This causes fishes to die. The Mekong river until recently used to provide cool breezes for people to enjoy. Now, however, standing on the river banks from mid-morning until the late afternoon is next to impossible, as temperatures continue to spike due to China playing with the flow of the Mekong at will.

Read more: After Trump’s exit, China is back to waging water wars on 70 Million people in the Lower Mekong Basin

China needs 200 billion cubic metres to drain in the water-starved and densely populated northern China from the three massive foreign rivers, the Mekong, Brahmaputra and Nu-Salween. In its part of the river, which China calls Lancang, no less than 11 massive hydropower plants have been constructed. These are used by the paper dragon to fill in reservoirs with water that belongs to downstream countries like Vietnam, Cambodia, Laos and Thailand. The China-triggered fluctuations also affect fish migration in a big way, thus threatening the ecological stability of the region as a whole. As such, China is playing with the livelihoods of over 70 million people, who rely on the Mekong river for food security, agriculture and transportation.

What China is waging against Thailand, by weaponising its upstream reservoirs to destroy the Mekong river basin, is no less than a war.