Biden turned Ukraine-Russia border into a searing inferno. But Macron is now dousing the fires 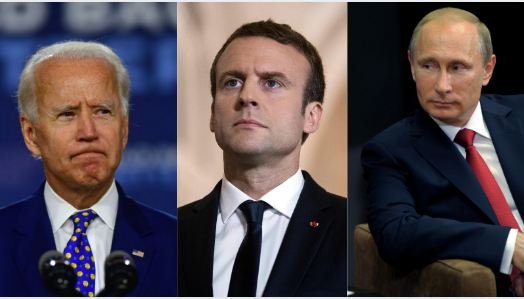 Ever since US President Joe Biden came to power, he has been constantly trying to ignite a major conflict with Russia. Biden is, of course, not taking on his Russian counterpart Vladimir Putin directly. In fact, he has pushed Ukraine so far into diplomatic aggression against Russia that the Russia-Ukraine border has now taken the shape of a searing inferno.

The position of the Russia-Ukraine border looks quite dangerous. Moscow is mounting a major troops build-up on Ukraine’s Eastern flank. Biden will definitely consider this a major achievement for himself but he is now facing stiff opposition. French President Emmanuel Macron is dousing the fires that turned the Russia-Ukraine border into a potential battlefield. Macron has made a passionate push for negotiations with Moscow to resolve the tense situation.

Till now, the US was taking charge of the Russia-Ukraine conflict. This had led to an exchange of angry remarks between Kyiv and Moscow. While Russia threatened that Ukraine would cease to exist in case of any major flare-up, Ukraine threatened to go nuclear if NATO denied membership to the Eastern European nation.

Meanwhile, the Biden administration added fuel to the fire by making provocative statements. The US Secretary of State Antony Blinken, for example, said, “President Biden’s been very clear about this. If Russia acts recklessly, or aggressively, there will be costs, there will be consequences.”

On the other hand, European powers like Germany and France were always tensed about the dangerous geopolitical game which the United States was playing. They understood that in case there is an uptick in Russia-Ukraine aggression, then Europe would be the first one to suffer and immediately come in the line of fire.

It is in line with these European fears that Macron has cautioned that the ‘West’ must demonstrate diplomacy and credibility in dialogue with Moscow. Macron’s reference to the West is an apparent dig at the Biden administration. The French President is forcefully urging the US to resolve the Ukraine crisis diplomatically as against the provocative route which the Biden administration has been taking.

Macron added, “I’m sure that President (Vladimir) Putin can be ready to reopen dialogue.” He elaborated, “We need an open and frank dialogue with Russia,” regarding a range of topics from arms control to controlling world crises.

Macron’s remarks are in line with the general European policy of cooling down the heated passions between Kyiv and Moscow. While both Berlin and Paris also remain critical of Moscow’s actions, they have been very careful in not annoying Russia. They have also been encouraging dialogue instead of aggression.

Earlier, German Chancellor Angela Merkel had also called up Vladimir Putin in reference to the increasing tensions between Ukraine and Russia. According to Merkel’s spokeswoman, Ulrike Demmer, she told Putin that Russia must reverse the huge build-up of troops on the Ukraine border in order to enable “a de-escalation of the situation.”

Macron has thus taken charge of the situation and the French President is de-escalating the soaring tensions which Biden had provoked between Ukraine and Russia.

To prevent the rise of new Jack Mas in China, Jinping bans books on Gates, Jobs and any other books with US-style capitalism