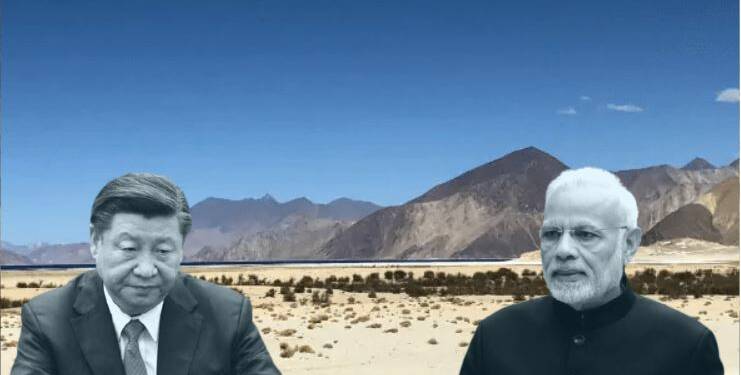 India and China are facing a spike in tensions all over again. In February, the Indian Army and the Chinese People’s Liberation Army (PLA) disengaged in the main friction points – North and South banks of Pangong Tso, and the Kailash range. It seemed as if other friction areas, namely Gogra and Hot Springs too would move towards disengagement sooner or later, but things have reportedly come to a standstill.

Indian Express recently reported that China has refused to leave from Hot Springs and Gogra. As per a highly placed source quoted in the Indian Express report, the Chinese even said India “should be happy with what has been achieved”. But the Chinese refusal is not a display of the paper Dragon’s general belligerence. And as shocking as it may sound, it has more to do with Depsang Plains than with Hot Springs or Gogra.

To put things in context, the Chinese PLA troops indeed want to withdraw from Eastern Ladakh. The Chinese troops have spent one full winter in Eastern Ladakh’s harsh weather and have totally run out of steam. This was perhaps the biggest motivation behind the Pangong Tso disengagement.

However, looking at China’s desperate situation, India decided to raise the stakes. The Indian side made Depsang Plains a part of the ongoing military talks between the two sides. Depsang Plains is itself an issue that pre-dates the Sino-India standoff which started last year.

The Depsang Plains issue goes back to 2013, when the PLA set up remote camps 18-19 km inside Indian territory. Since then, China has been pursuing area denial tactics in Depsang Plains.

As per Indian Express, a source said, “We were not able to reach our Limit of Patrolling… we used to go and access some of the patrolling points… there were selective patrolling points till where we had tracks”. As per the source, after 2013, China “built tracks, they had better connectivity, so they were blocking our movement”.

The source also stated that Indian troops are being blocked in Depsang “since before 2013 as well and after that”.

Initially, when top level military talks started between the two Asian giants, they were discussing the present friction points which did not include Depsang Plains. But then the Indian side managed to make Depsang Plains a point of discussion.

As per Indian Express, the source added, “Depsang has been added to the friction areas so that it gets resolved. As of April 2020, the status quo has not changed in Depsang. It is an old issue, but we added that. Initially, it was not even being discussed. Around the fourth-fifth round (of talks), we thought let us get this resolved as well. We felt Depsang could be the next flashpoint. That was our assessment. Why not get that resolved as well.”

So, India thought that if disengagement is going to happen, we will force China to move back even in the Depsang Plains. But for China and its President Xi Jinping, this is a very unsuitable situation.

If disengagement happens in the remaining friction points, as well as Depsang Plains, then it would be a major embarrassment for Xi Jinping. After all, Xi will come out looking like the man who sent PLA troops to get slaughtered in Eastern Ladakh, only to free up the territory which the PLA was denying to India since 2013.

India has landed Xi in a very awkward position. A tired PLA is desperate to disengage, but any disengagement on India’s terms would amount to a huge embarrassment for China. Time is running out fast, and a trapped Xi seems to struggle in search of an unlikely solution.

After turning Russia-Ukraine border into a warzone, Biden brings Korean Peninsula at the brink of a big war