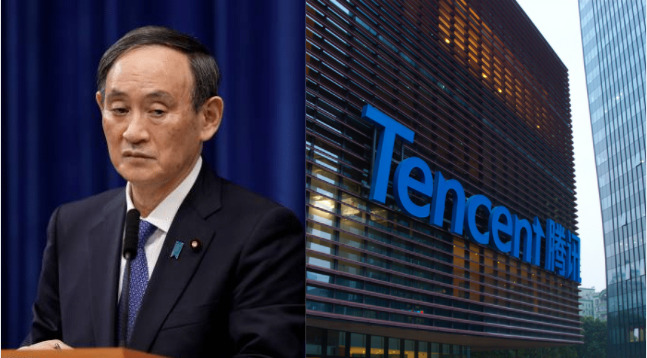 Japan has been at the forefront of tackling the menace of Chinese neo-imperialism, but even when it is trying its best, Beijing is able to find some loopholes and capitalise on them. This should come as a warning sign for the Suga government and make them more aware of these loopholes which can then be addressed. Chinese tech group Tencent Holdings’ investment in wireless carrier Rakuten has revealed what some see as the limits of new Japanese investment rules meant to ensure such deals are vetted on national security grounds.

Japan, since the Abe administration and now under Suga-san, has consistently followed the policy of creating and sustaining a front against Chinese misadventures. Be it equipping the South East Asian countries like Vietnam and Indonesia, supporting Taiwan and the Philippines, or working with India to improve connectivity with South Asia and South-East Asia. In addition to all this, Japan has been waging economic warfare, however, the latest development rings warning bells. The fact that China was still able to breach the investment firewall of Japan and gain a good chunk of shares from a Japanese company, is a major development.

Japan’s Foreign Exchange and Foreign Trade Act was amended to tighten controls on foreign investment in sensitive industries. The revised legislation, which was enacted in May of last year with China as the driving force, reduced the minimum stake that required prior screening from 10% to 1%. However, a Tencent subsidiary that acquired a 3.65% stake in Tokyo-based Rakuten in a March share issue, which was supposed to be a test case for the new regulations, was not subjected to prescreening.

Recently, the Biden-Suga meeting produced a dramatic result. The two leaders called for “peace and stability across the Taiwan Strait” in a joint statement. The two leaders also expressed “serious concerns regarding the human rights situations” in Hong Kong and Xinjiang. This is the first time since 1969 that the leaders of the two countries mentioned Taiwan in a joint statement. In order to further affirm the commitment against Chinese aggression in the region, Suga said, “We agreed to oppose any attempts to change the status quo by force or coercion in the East and South China seas and intimidation of others in the region.”

In such a scenario, when the Japanese were successful in creating and fostering a containment block, an attack of sorts on the Japanese economy has struck hard. “It was a shock that Chinese capital was injected into a critical Japanese corporation with so little fuss,” said a Japanese government source to Nikkei Asia.

Read more: The Japanese Prime Minister came to the US and successfully made Biden follow Trump’s Taiwan policy

The legislation allows for exceptions under some circumstances, such as investments that do not have access to nonpublic technologies. Prior notice is not required for investments that meet additional criteria, such as no board representation. Investors must self-report if an investment meets the exemption requirements. Tencent claims that the offer is purely a financial investment that does not require prior notice.

In the end, the 65.7 billion yen ($604 million) share purchase by Tencent subsidiary Image Frame Investment, part of a 242.3 billion yen fundraising round, was not met with scrutiny. Now as things have come to this and it cannot be reversed, the Japanese government has come up with a counter plan. Officials said the Japanese government intends to track whether Tencent complies with the exemption requirements and whether Rakuten protects confidential information from breaches. However, it is uncertain if sufficient personnel and other services are in place.