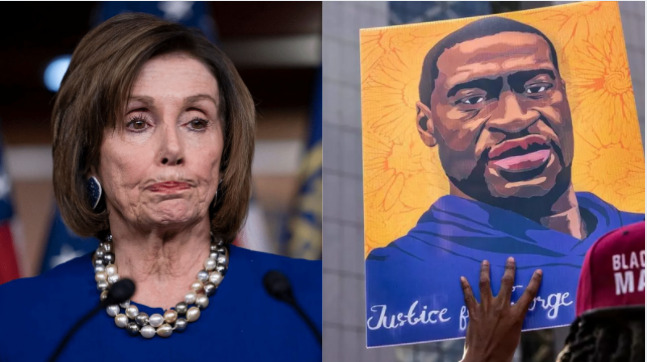 US House of Representatives speaker Nancy Pelosi called Chauvin’s conviction “a step in the right direction for justice” at a press conference following his conviction on three criminal counts. But she also drew sharp criticism by thanking George Floyd, the man who became a symbol for the left’s racial justice protests and movements, for dying.

“Thank you, George Floyd for sacrificing your life for justice,” Pelosi said, referring to Floyd’s death in May as Chauvin pinned his knee on Floyd’s neck for more than nine minutes.

Josh McLaurin, a Democratic member of the Georgia state legislature, said on Twitter, “Speaker Pelosi’s comment about George Floyd was totally inappropriate. At a minimum, she should apologize. But more than that, I think the gaffe clarifies how much this country would benefit from a Black Speaker of the House.”

The “George Floyd Justice in Policing Act” was passed by the Pelosi-led House, which seeks to put an end to violent law enforcement practices that have abused African Americans and other minorities. The bill, which has yet to be debated by the Senate, will outlaw police chokeholds and no-knock warrants, restrict police departments’ use of military vehicles, and mandate that officers wear body cameras. This will also make prosecuting police brutality simpler.

George Floyd’s death instigated widespread protests across the United States, Radical left-leaning Democrats instigated their supporters as the protests turned violent. Many lives were lost and damages worth billions of dollars were reported. The BLM gave the Democrats the social justice issue to topple Donald Trump with.

Pelosi’s remarks in the press conference to thank George Floyd for his death has lifted the veil of the Democrat’s true agenda. They do not care about social and racial justice. They only care about the partisan lines which they always keenly push.

Pelosi had never respected Trump as President. During one of Trump’s speeches in the Senate, Pelosi tore the copy of the speech given to her by the former President.

Read More: Failing to learn its lesson from Minneapolis, the Biden administration moves to cripple the police in the name of George Floyd

The Democrats used the noble cause of Social Justice for their own political gains and it worked marvellously. They were supported by the Big Tech who brought the hammer down on anyone and everyone who criticised the protests. Trump had given the police the authority to crackdown the violent protests, but the left brigade, led by the likes of Democrat Cortez and Ilhan Omar, cracked down over the authorities themselves. They pushed to defund the police in Minneapolis, Portland and Seattle and succeeded.

Using the death of an African American to topple the President is a sinister act. There are some lines that should not be crossed but when it comes to the Democrats, the party and the agenda reigns supreme. But Pelosi’s remarks have just pulled the veil from over their faces.