Joe Biden has failed India and he will pay for it 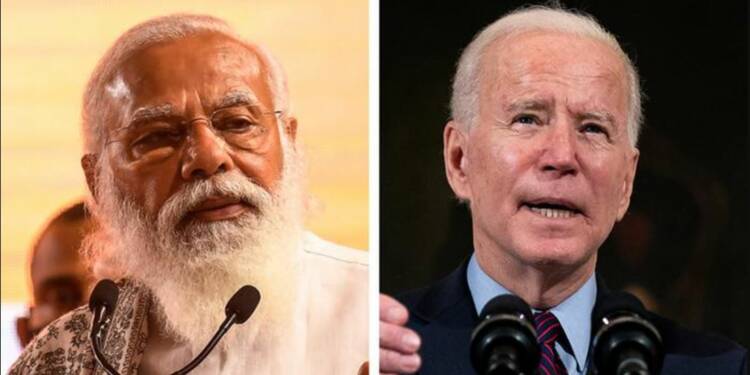 On Saturday, India reported 346,786 new cases of Covid-19, as the Chinese virus continues to ravage the length and breadth of the world’s oldest civilization and largest democracy. 2,624 precious Indian lives were lost in the past 24 hours. The crisis in India would not have been unfolding in such a horrifying manner, if we had a friend in the White House. Unfortunately, currently the White House has been occupied by an old hag who claims to be a liberal, but in reality, is a tyrant. Joe Biden – who is unworthy of being referred to as the President of the United States has the blood of thousands of Indians on his hands.

It is time to expose Joe Biden for his devilish ambitions. Make no mistake, Biden is an adversary for India, and is doing all he can to ruin Indo-U.S. ties. To prevent India from successfully vaccinating its people, the doddery President has invoked a war-time law to stop the supply of raw materials required by Indian vaccine manufacturers to ramp up their production capacity. This means that India’s vaccine programme is suffering tremendously due to Biden’s enforcement of the Defense Priorities and Allocations System Programme (DPAS) under the Defense Production Act (DPA) on vaccine raw materials.

What’s worse, the Biden administration is making no secret of the fact that it aims to imperil India’s vaccination campaign and the lives of its people. In a brazen show of indifference, State department spokesperson Ned Price, when asked about whether the Biden administration would lift the export embargo on critical vaccine materials for India, said, “Number one, we have a special responsibility to the American people…It is not only in the US interest to see Americans vaccinated; but it is in the interest of the rest of the world to see Americans vaccinated.”

After this indifference towards Indians, Ned Price had the temerity to say that the US is playing a “leadership role” in “seeking to contain the virus beyond our borders.” Well, here’s an advice for Ned Price and his 78-year-old boss – shove that leadership up yourselves, because frankly, the ‘leadership’ you claim to be displaying is proving fatal for thousands of Indians.

Joe Biden might be enjoying the plight of India and its citizens right now. Kamala Harris and he might be sharing gigantic private laughs as Indians continue to die, but guess what? Joe Biden has shot himself in the foot by trying to derail India’s vaccination campaign. He has messed with the wrong country at the wrong time. Prime Minister Narendra Modi is not someone Biden should have messed around with. Now, he must be ready to face the consequences of his actions, as the full and mighty force of Indians comes cracking down on his inept and selfish administration.

Had the Biden administration blocked vaccine and related raw material supplies to India if the US were facing a shortage of its own, India and its people would not have batted an eye. However, the Biden administration has hoarded millions of AstraZeneca Covid-19 vaccines, even when the US has no use for them. According to the powerful US Chamber of Commerce, which has called for the immediate release of millions of vaccines to India and other countries, “the vaccine doses will not be needed in the United States, where it’s estimated that vaccine manufacturers will be able to produce enough doses by early June to vaccinate every American.” Effectively, the Biden administration is not only blocking essential vaccine raw materials from being supplied to India, but is also hoarding millions of vaccines which it will never use.

Joe Biden has proven that he is no friend of India, and is instead, working to have Indians left gasping for vaccines and oxygen at a time of unprecedented crisis. Russia, on the other hand, which is a time-tested friend of India, has once again come to the rescue of ordinary Indians. In the next 15 days, Russia will begin supplying close to 300,000-400,000 Remdesivir injections per week, which would be increased subsequently. Talks between India and Russia are also on to begin oxygen supplies by ship soon.

Yes, India’s relationship with the US has taken off while its relationship with Russia has slowed. But Delhi still describes its ties w/Russia as “time tested.” Doesn’t say that about ties w/US. Events of recent days bear that assessment out. Russia is helping India, US is not.

Yet, the good times for America’s senile Democrat president will be short-lived. India will bounce back from this crisis with renewed vigour, and it will take on the Biden administration at a scale nobody ever has. After having infuriated Israel and having lost its prominence in the Middle East, Joe Biden has shot himself in the foot by blocking critical medical aid to India at a time when it needed it the most. In a multipolar world, by abandoning India in its time of crisis, the Biden administration has further pushed the United States into a disadvantageous position.

Already having angered its allies worldwide, the United States under Joe Biden must now be prepared to lose its leadership role in the Indo-Pacific too. Like the road into the Middle East runs through Israel’s heart, the road to assuming a leadership role in the Indo-Pacific runs via New Delhi. Joe Biden can forget Quad and cooperating with it to take on China. India will now handle China on its own, and it does not need American help for it so long as the United States is ruled by a madman like Joe Biden.

Today, Indian-Americans form the United States’ backbone. Science, health, industries, IT – every crucial sector of America has Indians playing lead roles. The US was a haven of opportunities for aspirational Indians to achieve their dreams. By leaving Indians to die, Joe Biden has ensured that the people of India give up their fascination for the United States and instead work domestically. And that should scare Biden and his loudmouthed Vice President. It should scare them to their meek bones.

Democrats enjoy considerable support among the Indian-American community. Well, now they can forget about getting any support from the community whose brothers and sisters back in India have been left to die by the Biden administration. Realisation has dawned upon them, that President Donald Trump would have never allowed such selfish designs of the American deep state fructify. Biden, however, as we all know, is a slave to the deep state. Democrats also have a lot to worry, because their party is going to have a massive cash crunch soon, as Indian-Americans will now stop donating to the Blue party for its President going rogue in the White House, against India no less.

In what should put Joe Biden to shame, even China has offered assistance of any kind to India. In India, we believe that time is very powerful. Hell, we gave the world the concept of ‘Karma’. Joe Biden needs to brace for impact, because his karma is going to come and haunt him very soon. Today India is facing a crisis. In the foreseeable future, the United States, owing to Biden’s inept leadership, might be facing an even bigger crisis. At that time, when Joe Biden would require massive assistance from India, he would be at the complete mercy of New Delhi, and Indians would reserve the right to extract their revenge from the Democrat President.

As for the present crisis arising out of a surge in Covid-19 cases, be rest assured, India will overcome it even without the assistance of the United States. However, this crisis has taught India a very important lesson, and has helped it identify its true friends from the cosmetic ones.

‘Don’t push Russia into China’s lap,’ Trump takes on Biden for his Russia policy and asks him to focus on China first