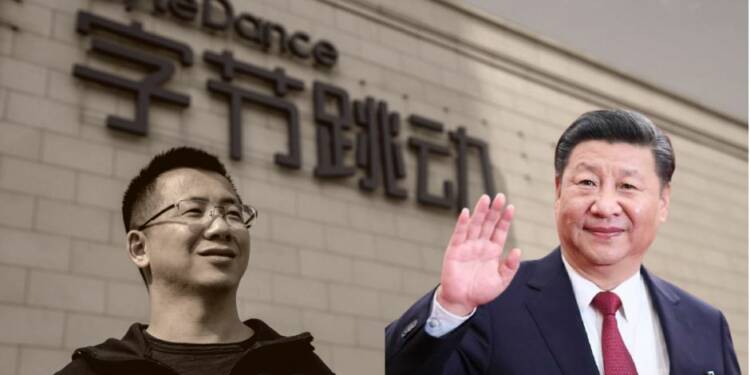 Xi Jinping and CCP fear the emergence of another Ant Group, given it can become a parallel power centre and threaten the leadership of Xi Jinping. The witch hunt of Jack Ma and his Ant Group was a result of the vulnerability that the all-powerful Jinping felt. Now as the economic situation is precarious, and the country is faced with no solution to boost the economy in sight, CCP is all set to destroy ByteDance as it cancels its IPO.

TikTok parent ByteDance Ltd.’s plans for an initial public offering have been put on hold as it seeks to comply with regulatory demands from both China and the U.S., the South China Morning Post reported, citing unidentified sources. Xi Jinping is showing all the traits of Mao, as he tries to become the 21st-century Communist authoritarian of China. And after what he did with Jack Ma and his Ant Group just recently, the Chinese companies and capitalists have become extremely fearful and want to stay miles away from going for the Initial Public Offering (IPO).

This is actually a bad sign for the Chinese economy and for the Chinese Communist Party, which wants to increase economic activity and attract investment to boost the plummeting economic indicators. However, Commander Xi Jinping pays no heed to this as he seemingly wants to take China back into the days of Mao Zedong.

Read more: After what Jinping did to Jack Ma’s Ant Group, fearful Chinese companies stay away from going for IPO

Although the companies were shying away from going for the IPOs, ByteDance was still hopeful of a support from the CCP given it is a domestic company which is doing Chinese Communist Party’s work the world over, be it shifting narratives, collecting data among other things. However, the extent of vulnerability among the leadership is so pronounced that even if the company wants to create an IPO, it will try not to attempt it.

When China’s anti-trust regulator recently revealed that it had slapped a fine of 18.2 billion yuan ($2.8 billion) on the Hangzhou-based tech giant, it became the country’s highest-ever antitrust fine. The fine is equal to approximately 4% of Alibaba’s domestic sales in 2019.  Alibaba had exploited its market supremacy, according to China’s State Administration for Market Regulation (SAMR). The e-commerce company has been targeting merchants who use rivals’ platforms since 2015, a tactic known as “Er Xuan Yi,” which translates to “choose one out of two.” Or at least these are the claims of China’s agencies. And these claims can be copy pasted on any big company.

Following weeks of speculation that a public offering was getting closer, the world’s most valuable start-up said on Friday it currently has no plans to seek an IPO, adding that it had made a careful study and concluded it does not meet listing conditions for the time being. Beijing-based ByteDance had been working with advisers on a float of some of its flagship domestic assets such as Douyin, news aggregator Toutiao and video platform Xigua that could raise billions, Bloomberg News reported earlier this month.