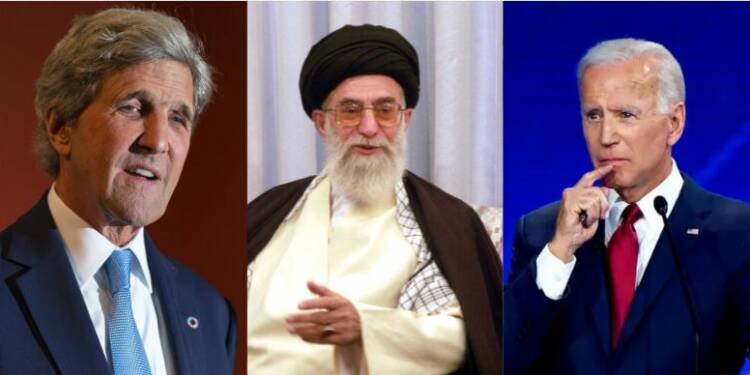 There is a pro-Iran President in the White House, and so Tehran will do anything to get the nuclear deal or Joint Comprehensive Plan of Action (JCPOA) revived. In fact, Iran has no qualms in blackmailing the friendly US President Joe Biden, if needed. So, this is exactly what Tehran has started doing. We are talking about Iranian Foreign Minister Mohammad Javad Zarif’s latest remarks about John Kerry, the U.S. Special Presidential Envoy for Climate. Zarif has made a clear attempt to drive a wedge between the Biden administration and Israel, in a bid to blackmail US President Biden into reviving the nuclear deal.

Zarif reportedly claimed in a leaked audio that Kerry informed him of more than 200 Israeli operations in Syria, while he was serving as the US Secretary of State under former President Barack Obama.

According to the audio leak accessed by the New York Times and other media outlets, Kerry shocked Zarif by disclosing that Israel had attacked Iranian targets in Syria more than 200 times. This is a revelation like no other.

John Kerry was ratting out Israeli covert operations in Syria directly to the Iranian foreign minister. Let that sink in. Wow. https://t.co/lmzhamTWFf pic.twitter.com/DzMAHAJeGy

Kerry has previously been accused of colluding with Iranian leaders only in order to undermine the Trump administration. And then, Kerry also has a long history of turning favourable towards Iran during his stint as the Secretary of State. In 2016, for example, Kerry had encouraged European Bank chiefs to invest in the Shi’ite nation.

But the latest leak mounts trouble on the Biden administration as John Kerry has a seat on the National Security Council as the Special Presidential Envoy for Climate.

Kerry, meanwhile, has done what every politician does to avoid controversies- refute the allegations. Speaking on predictable lines, the former US Secretary of State tweeted, “I can tell you that this story and these allegations are unequivocally false. This never happened – either when I was Secretary of State or since.”

I can tell you that this story and these allegations are unequivocally false. This never happened – either when I was Secretary of State or since. https://t.co/BTOdFE1khW

The political fallout of the leaked audio is clearly visible. Republicans have latched on the opportunity coming their way. Senator Dan Sullivan, Rick Scott, Nikki Haley and Elise Stefanik are some of the most prominent GOP leaders who have launched verbal assaults against John Kerry in a bid to mount political trouble on the Biden administration.

But how does the leaked audio help Iran? After all, Tehran has a friendly US President in the White House. So, why should it try to mount trouble on him?

Well, the fact remains that Tehran has only given a threat to Biden. The Iranian government is telling Biden the level of political damage which it can cause inside Washington if the US doesn’t push revival of the 2015 nuclear deal.

To put it simply, the leaked audio suggests that Tehran can easily drive a deep wedge between the Biden administration and Israel if things don’t go the way Tehran wants. At the end of the day, even Biden doesn’t want Kerry’s Iran history to create bad blood between him and the Jews or Israel.

After all, no US President including the Tehran-friendly Joe Biden can afford to upset Israel or the Jews. The Jewish community may not be a huge vote bank in American politics, but it is one the wealthiest and amongst the most generous of political funders within the US. They have a considerable lobby amongst both the Democrats and Republicans, which is a part of their strategy to preserve the special US-Israel alliance.

So, both Democrats and Republicans try to win over the Jews and their generous donations. Political careers in the US can get ruined if someone annoys the Jewish community. This is why Biden would not fancy Iran to open up allegations of his Climate envoy ratting out the Jewish nation of Israel during his stint as the US Secretary of State.

Yet, Iran has given Biden a sneak peek of the extensive damage it can cause, in case the White House walks back on his promise to revive the Iran nuclear deal. Iran doesn’t want to take down the Biden administration, but the Shi’ite nation has given a loud and clear message to the US President- we can take down your rule if you don’t fall in line.

India’s NSA Ajit Doval had Joe Biden by his neck. The result is here for everyone to see