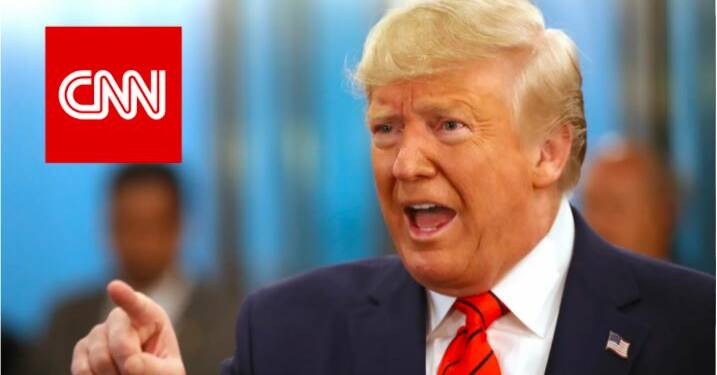 Former President Donald Trump and CNN have no love lost for each other. CNN, which is a part of the mainstream liberal media relished Trump’s electoral defeat last year, and now Trump is looking to settle scores with a big lawsuit.

Trump has spoken up about a secretly filmed Project Veritas video in which a CNN employee revealed that his network produced “propaganda” to oust former President Donald Trump during the 2020 presidential election. The former US President made some hard-hitting remarks against CNN during the latest edition of the conservative online talk show- The Dan Bongino Show. He even suggested that a lawsuit could be in the offing over this matter.

The secret Project Veritas video showed Charlie Chester, said to be a technical director at CNN, as he discussed how they “got Trump out” of office during a series of phoney Tinder dates.

He said, “Look what we did, we [CNN] got Trump out. I am 100​ percent going to say it, and I 100​ percent believe that if it wasn’t for CNN, I don’t know that Trump would have got voted out. Our focus was to get Trump out of office, right? Without saying it, that’s what it was.” Chester added that he came to work at CNN because he ​​”wanted to be a part of that.”

During the talk show, host Dan Bongino asked Trump about his opinion on the videos. Trump said, “This was an incredible thing, for this to have happened was just outrageous.” The former US President added, “We knew it was happening anyway Dan, look, nobody doubted it. But now we have it from a pretty top executive, we have it there.”

Trump continued, “What are we going to do with it? I don’t know, maybe we will do something with it.” Yet, the former US President did talk about lawyers. He added,  “But we read the transcripts and the lawyers can’t even believe it. This is like a campaign contribution of magnitudes like nobody’s ever seen before.”

Project Veritas has been facing a lot of criticism and propaganda. The right-wing activist group was even banned by Twitter and its founder, James O’Keefe, has even decided to sue the social media company. O’Keefe alleged that the social media giant falsely accused him of operating fake accounts when it permanently banned him from the microblogging platform.

Trump however showered praises on Project Veritas. The former US President told host Bongino that he believes “the guys at Project Veritas have done a tremendous service,”  that “they get hit all the time too, I guess they get taken off Twitter and taken off everything.”

Trump is therefore looking to settle scores with CNN. From his remarks, it seems that the secretly filmed Project Vertias video has impressed upon the former US President. It could as well form the background of an epic legal face-off if Trump actually decides to sue CNN.

Japan’s RCEP ratification gets overshadowed by launch of India-Australia-Japan supply chain, as Suga and Morrison make their intent clear

For two years, the Interpol chief was a Chinese stooge who issued red corner notices against any and everyone for speaking against the CCP